Just when you thought it was safe to board the ASX Dividend Express, this happens.

The ASX is headed for its biggest one-day fall of the year, following in the steps of US markets.

The headlines have already started…

Doing the damage was US factory output expanding at its weakest pace in eight months… just after the Federal Reserve increased its tapering.

Whoa, Janet Yellen. Turn the money printing tap back on, and FAST.

And Glenn Stevens and his merry men at the RBA — don’t listen to the economists. Save our stocks. CUT interest rates, today, please!

A correction wasn’t part of the plan.

“Everyone walked in this year expecting a continuation of at least growing economic activity, and the latest data we’ve been seeing throw a bit of cold water on that theory.”

Mix in a bit of tapering, emerging market worries, China fear, doubts about the strength of the US economic recovery, and some good old fashioned fear and panic… and suddenly you’re looking at a potential stock market correction.

Corrections are nothing new, of course.

Yes, a correction is overdue.

Yes, living through volatility is part and parcel of being an investor.

As someone who has invested through countless corrections and a couple of full blown market crashes, let me assure you staying the distance has always been the best course of action, as it will be again this time around.

It’s at times like these you should also remember the words of Equity Trustees chief investment officer George Boubouras, who recently said a market correction…

“…would be an ideal buying opportunity.”

“Only those who will be sellers of equities in the near future should be happy at seeing stocks rise. Prospective purchasers should much prefer sinking prices.”

3 ways to beat the market correction

Now I realise staying calm and buying stocks when doom, gloom, fear and panic are in the air is easier said than done… especially if you are already fully invested.

You essentially have 3 options…

Ride out the storm (and really, this is only a bit of light rain at the moment. The thunder and lightening are a long way off.) Compare your portfolio now to where it stood this time last year and bask in the glory of all that wealth you’ve added to your fortune over the past 12 months.

Indiscriminate market sell offs see the good thrown out with the bad. If you are fully invested, use the opportunity to sell your least favourite stocks — yes, even if it means taking a loss — and reinvest the proceeds in your most favourite stocks.

Give one of those options a try, Foolish readers. I guarantee any one of them will make you feel better than comparing the total value of your portfolio today to yesterday.

At the same time, two other Australian retailers are fighting hard not to become extinct.

And it seems investors wouldn’t have been the wiser, if it wasn’t for some enterprising journalists at Fairfax.

The story goes that they confronted David Jones management, after uncovering details of the merger bid. DJs were then forced to reveal details of the bid to the ASX and investors, including the fact it was knocked back within 24 hours.

What is perhaps surprising is that the bid came in October 2013, more than three months ago. David Jones management say the bid was incomplete, non-binding and not in the interest of shareholders – and therefore they didn’t need to report it to the ASX.

Pity they didn’t bother to ask shareholders that.

Now DJ’s Chairman Peter Mason has revealed that David Jones may still be interested in a merger deal with Myer, “if it was in the best interests of shareholders.”

Fairfax media reports that Mr Mason is meeting with key shareholders this week, with reports several are a little bit upset about the goings on at DJs.

Oh to be a fly on the wall at some of those meetings!

What is more concerning for shareholders in both companies is the decline of department stores as a business model.

When every suburban shopping mall offers a much wider variety of products and services, there’s little need for consumers to enter Myer or DJs, unless it’s for their exclusive brands.

The days of the department store selling everything from underwear, makeup, perfume, fashion, toys, books, household items, consumer electronics and even furniture and white goods appears over.

Several of those categories have already departed and others are on the way out.

DJs would’ve packed up its consumer electronics department last year if it wasn’t for Dick Smith (ASX: DSH) bidding to run it as a store-within-a-store.

Both Myer and DJs have flagged plans to downsize some of their stores to ‘village’ store formats, and exit some store locations when the leases expire.

My guess is that the David Jones and Myer stores in ten years’ time will be wildly different (if they still exist that is) to what they are currently.

A merger between the two would at least allow them to attempt to compete with the invasion of at least ten new labels, including Zara, TopShop, Uniqlo and Williams Sonoma’s Pottery Barn already setting up shop in Australia.

More are set to arrive with H&M, Forever 21 and Marks & Spencer rumoured to be looking for retail space.

The good news is investors have plenty of other options to choose from when it comes to retailers, including small cap stocks.

A small stock is a beautiful stock

Speaking of small caps, the sector as a whole may be about to put its three years of under-performance behind it.

Investors have bypassed the sector in favour of fully franked yield plays amongst the heavyweight top ASX stocks like the banks, Telstra (ASX: TLS)Woolworths (ASX: WOW) and Wesfarmers (ASX: WES).

Now the tide may be turning, with valuations of the banks in particular looking ‘stretched’.

Investors also need to remember that it’s much more difficult for large caps to double or triple their earnings – as the saying goes ‘Elephants can’t gallop’.

But small caps can easily multiply their earnings by an order of magnitude, and see the share price follow.

The downside is there’s more risk of them heading in the opposite direction too. You pay your money and you take your chances, particularly at the risky, penny share end of the market.

But if you want ten-baggers — those stocks that can return ten times your purchase price — small caps is the space you are mostly likely to find them.

And this chart from The Sydney Morning Herald suggests that there’s not too much value for stocks with market caps of more than $2 billion. 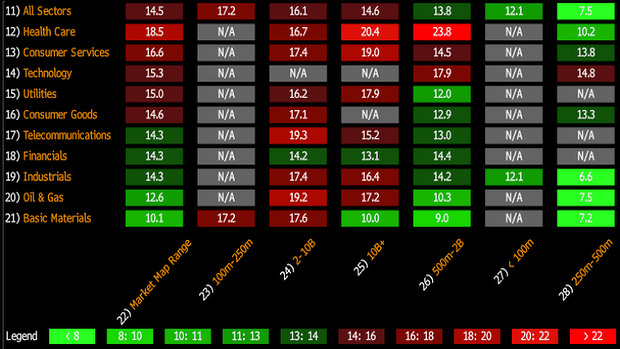 It’s a different story for stocks that range in market cap from $250 million up to $2 billion – note the green squares.

Matthew Brooker from fund manager Schroder’s has told the AFR that he believes opportunities exist in the small cap space, but are not abundant.

And Zurich investment specialist Angus Crennan, has told InvestorDaily that the performance lag in small companies will normalise over time.

That could mean big opportunities at the smaller end of the market.

Despite a market cap of just over $1 billion, this stock is paying a fully franked dividend yield of 3.7%, has plenty of potential and is sailing under the radar of many investors.

The bottom line is, if fast growing, attractively priced, dividend paying stocks were attractive yesterday, the Dow’s overnight crash has done nothing to change that.

There may be some short-term volatility, but if you can see through the falling share prices and keep focused on the long-term, through the beauty of compounding returns, you still should be able to generate significant wealth from investing in the share market.

And on that note, I wish you happy and profitable investing.