For investors like you and me, there’s good news and bad news.

First, it seems Rio Tinto’s decision to axe previous CEO Tom Albanese has paid dividends for the company, with new chief Sam Walsh presiding over a positive end to 2013.

Albanese was sacked in January 2013 after presiding over a truly massive destruction of shareholder value, including writedowns of around US$27 billion against its US$38 billion purchase of Canadian aluminium producer Alcan in 2007.

Yet profits have fluctuated wildly since then, and that’s despite rising commodity prices and massively increased production.

How massive an increase?

A double-twist in the Rio tail

The other twist is, despite the massively increased production, and an iron ore price riding about as high as you’d imagine it could go…

Over the last 12 months, Rio Tinto shares have gone up exactly 0%.

Did I miss the mining boom? Rio shareholders certainly did.

As I mentioned yesterday, broker CLSA is predicting the iron ore price to fall below US$100 a tonne in the second half of this year.

Unfortunately for many of us, Rio — given its size in the ASX — is a staple stock in most corporate, retail and industry superannuation funds.

Thanks for nothing Rio.

Stating the obvious, in a year when the ASX jumped 15%, and popular stocks like Australia and New Zealand Banking Group (ASX: ANZ) soared over 20%, most stock-pickers would have done far better than buying Rio Tinto a year ago.

It’s just one more reason why many of us would be better off taking control of our own finances.

Also stating the obvious, given we’ve previously highlighted his pathological dislike of mining stocks, it should be no surprise Scott Phillips, our ace Motley Fool Share Advisor stock picker, has avoided Rio like the plague.

Instead he’s got something a bit more contrarian in mind…

Doubling the index return? It pays to be contrarian!

You’ll have to look far and wide to find an analyst or commentator who is excited about Australian retail stocks, but that hasn’t put Scott Phillips off.

Back in March 2012, he tipped shares of Harvey Norman (ASX: HVN) in a widely read article in The Sydney Morning Herald and other Fairfax publications.

Plenty of investors thought he was nuts at the time. (Even Scott said, “I must be mad”!)

Nonetheless the shares have climbed 76% since then, including dividends.

It pays to be contrarian.

And the performance of some of those retailers could be set to improve even further, given the news from British fast fashion retail invader ASOS. 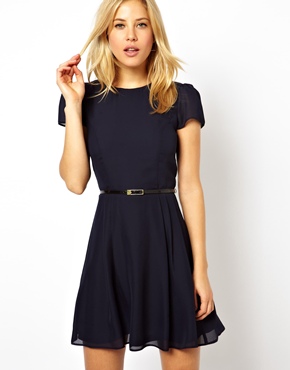 But now the faddish retailer is out of style.

Interest in ASOS has waned, with the retailer reporting growth had spluttered in its key overseas markets including Australia.

At the time, critics may have scoffed at his remarks… but perhaps he’ll have the last laugh.

Myer have problems of their own, especially online – their website crashed during the Boxing Day sales, and stayed down for a week. It’s hardly the stuff of an emerging online retail giant. Amazon would hardly be shaking with fear…

All of which might explain the lowly rating of Myer’s shares – a P/E of 12.8 and a fully franked dividend yield of a juicy looking 6.6%.

On the bright side, and looking ahead, you could look at the crashed website as a positive, given it presumably fell over due to overwhelming demand.

That, and the crashing Aussie dollar (now down at US88 cents, and falling after poor local employment figures out today), mean it could also pay to be contrarian with Myer.

What giveth in dividends, they take back in new shares

There’s even bigger news, though, than who’s winning the party-dress wars. One likely to affect Australian investors for years to come…

In 2013, according to Credit Suisse analysts, Australian companies were the biggest issuers of equity in the world.

In all, Australian companies issued around $40 billion in new shares last year. By contrast, US companies bought back an estimated US$500 billion of shares over the same period.

Offsetting the issue of new shares, our companies tend to pay higher dividend yields than US companies, thanks to our tax system, which does away with double taxation of company profits through franking credits.

And don’t we love our fully franked dividends!

Much of the growth in the S&P/ASX 200 index in 2013 was due to investors jumping into high dividend payers, such as Commonwealth Bank of Australia (ASX: CBA), Westpac Banking Corporation (ASX: WBC),Woolworths (ASX: WOW) and Telstra Corporation (ASX: TLS).

But bear this mind: Continuing to splash cash on the big four banks this year in the hope of higher dividends could be fraught with danger.

Ratings agency Fitch Ratings has poured cold water on the prospect of the banks substantially increasing their dividends in 2014.

If profits aren’t growing, the banks will find it hard to grow earnings and therefore dividends.

And there’s another underhanded trick that they have used before….

Be aware of companies underwriting their dividend reinvestment plans.

I called it the ‘Claytons dividend’ in 2012 – with new shares being issued to cover the dividend amount.

As ever, I wish you happy and profitable investing!

The Motley Fool's disclosure policy is accountable. Of the companies mentioned above, Mike King has an interest in Telstra. All returns cited are hypothetical and based on the percentage change between the stock price at the time of recommendation and the current or sell price (if the position has been closed) at the time of publication. Brokerage, taxes and any other associated costs are not taken into account. Please remember that investments can go up and down. Past performance is not necessarily indicative of future returns. Performance figures are not intended to be a forecast and The Motley Fool does not guarantee the performance of, or returns on any investment. All figures are accurate as of 16 January 2014.