Some celebrated the Dow Jones index finally closing above 13,000 earlier this week, but another more-meaningful milestone was recently reached. Adjusted for dividends, the Dow is at an all-time high, surpassing its nominal record set in October 2007: 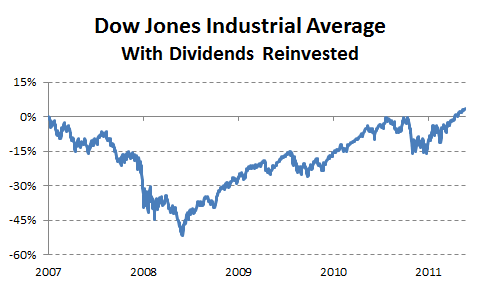 What does this mean? Like Dow 13,000, not much. It’s a psychological milestone that tells us nothing about value, opportunity, or what might happen next.

But what it does say loud and clear: Patient investors win. After the deepest recession since the Great Depression and a near collapse of the global financial system, it took just four years for US investors who bought at the very top to recoup their losses. Those who scooped up bargains along the way have done far better.

Back here at home

How have you done over the past four years?

We recently highlighted 4 stock-picking strategies that have worked for decades, including buying shares paying big dividends. We also went one further, and suggested 3 great dividend stocks for the beginning investor.

Now we’re not necessarily huge fans of the investment return potential of the companies in the ASX 20 – the 20 largest companies on the ASX. They’re already huge and for some, their best growth is behind them. But for the sake of this exercise, I just ran the historical dividend yield of the ASX 20. It comes out at 4.9%, on average. If I allow for the different sizes of the companies on the ASX 20 – i.e. if we bought them based on their relative size (more of BHP Billiton Limited (ASX: BHP), less of Brambles Limited (ASX: BXB) for example) – the average goes up to 5.1%.

Not satisfied? That’s okay – how about we throw in some franking credits. The dividends of the ASX 20 are – on average – franked to 70% (zero for Newcrest Mining Limited (ASX: NCM) and 100% for Wesfarmers Limited (ASX: WES) and Santos Limited (ASX: STO). That takes our original 4.9% to 6.4% ‘grossed up’.

Still want more? Most companies will be able to grow profits year after year, and the dividend is often increased as a result. The ASX 20 has increased its earnings per share by a tiny fraction under 10% per year for the last 10 years. Most of that growth will find its way to increased dividends – and the part that doesn’t is likely to be used be invested for growth further down the track (as long as management doesn’t squander it)!

The above numbers are only averages. For example, the dividend yields of the ASX 20 range from 1.5% to 8.5% – our old friend, Telstra Corporation Limited (ASX: TLS) – and the 10year growth rates from -2.3% for Suncorp Group Limited (ASX: SUN) to 23.7% for CSL Limited (ASX: CSL), 24.2% for BHP and 40.3% for Newcrest. In other words, the average would give you quite a reasonable return – but a portfolio of well selected, dividend paying shares could do even better.

Scott Phillips Is The Motley Fool’s feature columnist. Scott owns shares in Telstra. You can follow him on Twitter @TMFGilla. The Motley Fool’s purpose is to educate, amuse and enrich investors.This article contains general investment advice only (under AFSL 400691). Authorised by Bruce Jackson.