U.S markets were closed overnight for Martin Luther King Jr Day. The ASX was like a little lost dog in morning trade, up an underwhelming and rather boring 2 points.

Mr King (no relation by the way, although he was born Michael King), is most well-known for his 1963 “I have a dream…” speech, and as leader of the African-American Civil Rights Movement.

Towards the end of his speech, King departed from his prepared notes and instead described his dreams of freedom and equality in a country shaped by slavery and racism.

The US has come a long way since that speech, not just in terms of civil rights, but also the stock market, despite several wars, 9/11, market crashes, including the global financial crisis, the tech crash and several booms.

And here’s a guarantee I’m prepared to make…

The market will go up over the long term as surely as the sun rises.

You can bet on it.

One bet I’m not taking however, is on our Big Four Banks.

You don’t have to be Sherlock Holmes to figure this one out.

Bloomberg has reported that Australia’s largest banks are trading at the most expensive levels since before the global financial crisis, with a rise in mortgage lending allowing them to increase their legendary dividends.

Shares in the big four have soared since January 2009, with the Commonwealth Bank (ASX: CBA) up a whopping 176% – not including dividends, ANZ Bank (ASX: ANZ) up 106%, Westpac Banking Corporation(ASX: WBC) 90% and even the laggard, National Australia Bank (ASX: NAB) is up an impressive 66%.

“Australian banks are the most expensive in the world. If you want to get financial sector exposure, we’d much prefer to go get it outside the country.”

In the same article, Bloomberg says Aussie banks are trading at 2.1 times their net value of their assets – the highest since 2007 and an astonishing 75% higher than the MSCI World Bank index.

Below is a chart showing the price-to-book ratios against return on equity ratios, both common ratios used to value banks. As you can see, our banks are right at the top on valuations, compared to US and European banks. 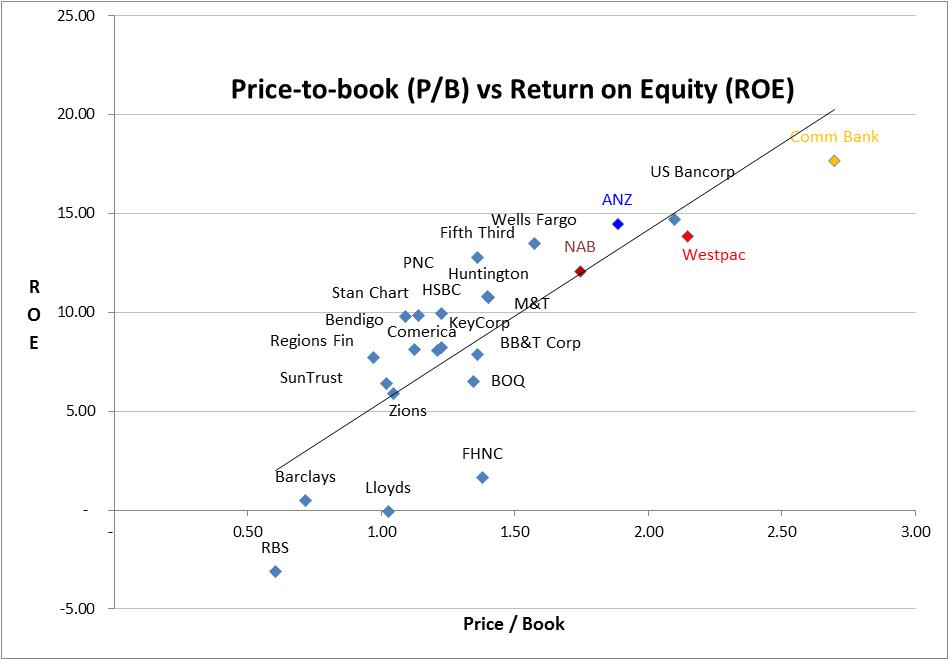 Goldman Sachs analysts agree, in a report calling the valuations of most of the big four banks “stretched”.

But share prices could be set to rise even more and become even more expensive, with Aussie bank fan Alex Tedder, a New York-based fund manager also telling Bloomberg…

“The Australian banking sector is going to continue to show nice earnings growth. Yields are still fairly high and you’ve got a good setup for creating sustained dividend growth that will continue.”

Three of the big four still sport fully franked dividend yields above 5%, with Commbank’s yield falling just below the magic marker in recent times as the share price rallies above $70.

HSBC economist Paul Bloxham, writing in yesterday’s Australian Financial Review (AFR) says Australia’s economy is expected to post a solid but un-spectacular year of growth in 2014. But he says low interest rates appear to have kicked-off a rise in housing construction, which could lead to decent credit growth ahead for the banks.

The lowdown is that while Australia’s big four are currently expensive, they could still go higher yet, especially if they can generate higher earnings growth and dividends.

And that could easily see Bell Potter’s Charlie Aitken’s ASX target of 6,000 brushed by the wayside, given the banks’ combined large percentage of the S&P/ASX 200 index.

But that’s not a bet that we’d be willing to take, despite our optimism for Australia’s economy.

Unemployment is rising and Mr Bloxham says tightening fiscal policy is a significant risk this year as Tony Abbott and Joe Hockey look set to take the axe to the federal budget. Either or both could derail the banks’ prospects for growth in 2014, and see those lofty share prices come under pressure.

With so many other stocks to pick from, including those paying higher dividends than the banks, investors need to ask themselves, “Do they feel lucky?”

The one cheap, “under the radar” IPO I bought late last year…

One stock I’m feeling particularly lucky about is a small-cap ASX healthcare stock I bought into late last year. It’s very early days, but I’m already up 5%, and hopeful this could be the start of a beautiful love affair.

I’ll have more on it, including the name of the stock, in tomorrow’s edition of Motley Fool Take Stock.

On the other hand, gold, the metal that earns nothing and produces virtually nothing, is hitting three month highs.

The price of gold has risen to US$1,260 an ounce, its highest level since November 20, and market analysts are coming out of the woodwork to predict higher than forecast prices, as fears of inflation raise their head.

“Inflation is back on everyone’s radar, the safe-haven appeal [of gold] is back…”

You can also imagine my delight when I saw my favourite gold miner  Silver Lake Resources (ASX: SLR) soar 19% yesterday, after the gold miner upgraded its production forecast, and reported all in production costs of A$1,000 an ounce for the last quarter.

Add in a recovering gold price and a falling Australian dollar and Silver Lake could be one of the best performers in my SMSF this year.

Silver Lake was recently named by Motley Fool Share Advisor stock-picker Scott Phillips as one gold stock on his radar.

Since then, Silver Lake is up an impressive 52%. As to whether that was the bottom for gold, and gold stocks, remains to be seen.

The Age recently reported analysts at Citi have turned bullish on mining stocks for the first time in three years.

According to the same publication, they argue investor sentiment has “hit rock bottom”, saying…

One stock that certainly fits the bill of hitting “rock bottom” is uranium miner  c.

Shares in this former market darling jumped 27% last week as the company announced that it had sold a 25% stake in its Langer Heindrich mine in Namibia in Southern Africa.

In early trading yesterday, shares in Paladin jumped another 17% before closing only marginally up on the day at 56 cents. It’s a far cry from the glory days of 2007 when Paladin shares were swapping hands for more than $10 a pop.

The market likes the long-awaited sale because it means a capital raising appears less likely.

Note the ‘less likely’, rather than assured.

The bottom line is investor enthusiasm for Paladin may be getting ahead of itself.

But bullish commentators Cantor Fitzgerald believe 12 Japanese nuclear reactors will restart in 2014, and say many more are under construction, planned or proposed (556) than before Fukushima (541).

The saying goes that history never repeats, but in the nuclear world it appears it has. Following the nuclear incidents in Chernobyl and Three Mile Island, demand for uranium and nuclear energy waned and took decades to recover – only to be hit again by the Fukushima incident.

Odds are, there will be another nuclear accident down the track. It’s just a matter of when, and where.
The current uranium price of US$34.50 per pound is well below the current estimated marginal cost of production of US$40 per pound.

Add to that the explosion in production of cheap energy sources such as shale gas and liquids, and the rise of alternative fuels such as wind, solar and geothermal energy, and nuclear power is on the nose.

For uranium producers like Paladin and Energy Resources of Australia (ASX: ERA), the future is certainly not assured.

Despite Paladin’s recent share price performance, this is one stock you probably want to avoid.

Thanks for nothing Paladin.

Interested in our #1 dividend-paying stock? Discover The Motley Fool's favourite income idea for 2014 in our brand-new, FREE research report, including a full investment analysis! Simply click here for your FREE copy of "The Motley Fool's Top Dividend Stock for 2014."