An iPad Mini is coming. Media invites for the event might even go out as soon as this Wednesday, which implies the unveiling taking place a week later. What remains up in the air are critical details such as pricing or how many Apple could sell this quarter.

Well, The Wall Street Journal is offering up a target on the second part of that puzzle, saying that Apple has ordered up 10 million units from its suppliers. That’s about twice as many as Kindle Fire HD units that Amazon.com  has ordered, according to these same sources. That’s a pretty bold bet on iPad Mini demand, especially for a product that hasn’t even been officially announced to the public. But then again, CEO Tim Cook has been known to make bold bets before.

In order to really let the magnitude of that 10 million figure sink in, this is how iPad unit sales have actually panned out since the tablet’s launch relative to that target. 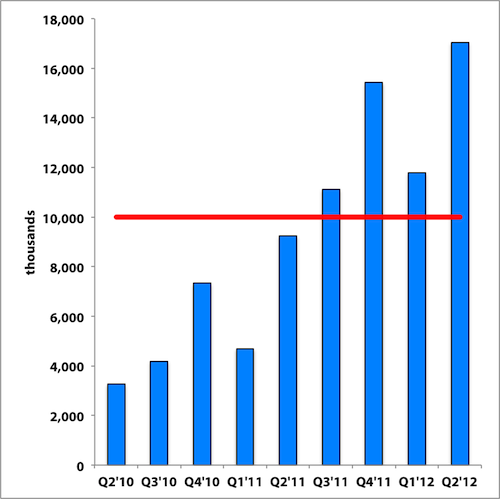 It took six quarters for the 9.7-inch iPad to break 10 million in quarterly unit sales, and now Apple may be betting the iPad Mini can break that threshold from the get-go. Bold, indeed.

I’m operating on the assumption that Apple will price the device at US$299, since US$249 now makes no sense in light of the US$299 iPod touch that was just released. It would be rather odd to offer a 7.85-inch iPad Mini for less than a 4-inch iPod touch. With that in mind, Apple will probably play the same onboard storage card as always, offering storage upgrades at a premium.

If the company offers an entry-level 16 GB model at US$299 and a 32 GB model at US$399 and sells 10 million units, that implies between US$3 billion and US$4 billion in incremental revenue in the fourth quarter. With broader tablet adoption accelerating, Apple has a good shot at hitting that lofty target.

The introduction of the iPad Mini is an event Apple investors have been looking forward to for months. The stakes are high and the opportunity is huge – both for Apple and its resellers such as JB Hi-Fi Limited (ASX: JBH), Harvey Norman Holdings (ASX: HVN), David Jones Limited (ASX: DJS) and Myer Holdings Limited (ASX: MYR).

If you are just looking for ASX investing ideas, look no further than our brand new free report: The Motley Fool’s Top Stock for 2012-13. In this free report, Investment Analyst Scott Phillips names his top pick for 2012-13…and beyond. Click here now to find out the name of this small but growing software company with huge potential. But hurry – the report is free for only a limited period of time.

Motley Fool writer/analyst Mike King doesn’t own shares in any company mentioned. The Motley Fool’s purpose is to help the world invest, better. Take Stock is The Motley Fool’s free investing newsletter. Packed with stock ideas and investing advice, it is essential reading for anyone looking to build and grow their wealth in the years ahead. Click here now to request your free subscription, whilst it’s still available. This article contains general investment advice only (under AFSL 400691). Authorised by Bruce Jackson.

A version of this article was originally published by Evan Niu, on fool.com. It has been updated by Mike King.