Mega-cap public companies have gotten unbelievably large in the past few years. Some of the technology giants like Apple and Microsoft have gotten so large that their market capitalizations -- the total value of their publicly traded shares -- are now north of $1 trillion. Only six publicly traded companies in the United States have ever joined the exclusive $1 trillion market cap club. But what company will be the next to join? I think a good candidate is Nvidia (NASDAQ: NVDA), the maker of computer chips for gamers, cryptocurrencies, data centers, and many other technologies.

Nvidia's market cap is currently around $400 billion. Can it join the ranks of companies valued at $1 trillion, or more than double its current price, by 2025? Let's investigate.

Recent growth has been fantastic

To take a look at Nvidia's prospects to reach the $1 trillion club, we first need to look at its financials and growth. In its latest quarter, revenue hit $8.29 billion, up 46% year-over-year, and free cash flow hit $1.37 billion. Nvidia is currently seeing super-strong growth for its data center business, which grew revenue by 83% year-over-year to $3.75 billion. Gaming revenue, Nvidia's other large operating segment, is seeing solid growth as well, with revenue hitting $3.62 billion in the quarter, up 31% year-over-year.

And there's reason to be optimistic about both segments continuing to grow over the long term. Video games and associated technologies are growing steadily each and every year, and data center build-outs continue to happen in order for companies to build out cloud computing infrastructure. There should also be continued growth in machine learning and artificial intelligence (AI) research. Nvidia's various computing products are the market leaders for these industries.

Watch out for short-term headwinds

There's one thing Nvidia investors should be concerned with, at least in the short run, and that is cryptocurrencies. Long story short, cryptocurrency companies and miners use Nvidia's computing products to run their businesses. With the crypto markets crashing, these companies are starting to sell their Nvidia products, sometimes for prices well below retail. This increase in the supply of used products has the chance to decrease demand for new Nvidia products coming down the manufacturing line, which would hurt Nvidia's top-line revenue growth.

Regardless of whether or not Nvidia gets hit by cryptocurrency demands, the long-term growth drivers for the business remain intact. People are playing more video games, businesses are building out more data centers, and researchers are building out more and more AI technologies. All bode well for the demand for Nvidia's products in the future.

So will it join the $1 trillion club? 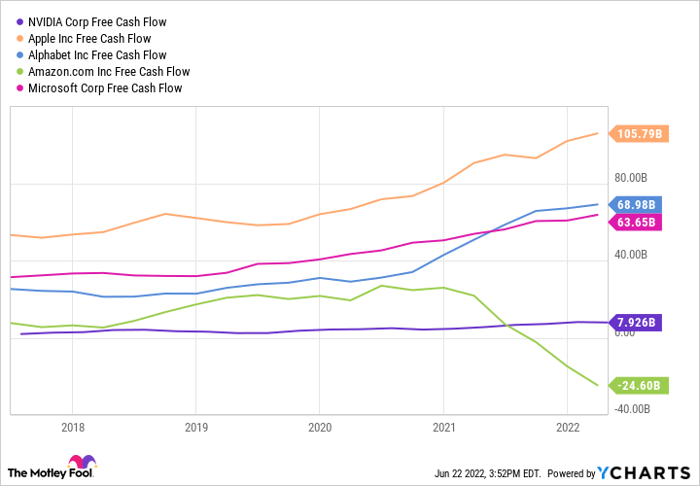 As you can see in the above chart, Nvidia generated just under $8 billion in free cash flow over the last 12 months. In order to hit $40 billion by the end of 2025, the company needs to grow its free cash flow by 50% a year for four straight years. While certainly possible, it doesn't seem probable for a company of this magnitude to grow that fast. Of course, the stock could hit $1 trillion with pure multiple expansion, but investors shouldn't be banking on that happening, especially as we enter a bear market.

Given the tailwinds around computing, AI, and data centers, Nvidia is on a path to eventually join the $1 trillion market cap club. But to do so by the end of 2025 seems unlikely.