Warren Buffett has steered Berkshire Hathaway to incredible success since taking over as CEO in 1965. The legendary investor's belief that it pays to be greedy when others are fearful has helped power the company's success, and putting that tenet to work could help elevate your own portfolio. It's almost impossible to predict when crashes will hit with a high level of consistency, but investors can dramatically improve their long-term performance by being ready to take action when volatility hits. With that in mind, a panel of Motley Fool contributors has identified three stocks in the Berkshire portfolio that are worth pouncing on next time they're on sale.

The future is in the data

Keith Noonan: Sorting and analyzing valuable data has already emerged as one of the keys to business success in the 21st century, and it will play an increasingly important role in separating winners from losers. You may have already heard someone say, "Data is the new oil." The statement may be a bit oversimplified, but there's a lot of truth to it. Unfortunately, there are also a variety of factors that complicate success in the age of big-data analytics. An incredible amount of new data is being pushed into the cloud each day, and growth for the number of connected devices and communications services and overall digitization of the economy means companies are tasked with sorting and analyzing a daunting array of information. Further complicating matters, valuable data is often separated across various cloud platforms and infrastructure providers. That's where Snowflake (NYSE: SNOW) comes in. The company provides a platform that makes it easy for businesses to gather and analyze data from different platforms and sources. Customers can even share data with other users on the platform. With a market capitalization of roughly $79 billion and the company valued at approximately 70 times this year's expected sales, Snowflake admittedly has a highly growth-dependent valuation. That characteristic could set the stock up for a significant pullback in the event of a market crash, but investors may have a chance to benefit if that scenario comes to pass. As Buffett has said: "A market downturn doesn't bother us. It is an opportunity to increase our ownership of great companies with great management at good prices."

Jason Hall: The growth of e-commerce is tied to the expansion of the global middle class, which is set to explode over the next decade. Yet American Express (NYSE: AXP) often gets ignored in this trend. That's a shame, because it also has a long record of beating the market, and one of the strongest credit and payment businesses on earth with a focus on financial services that appeal to people looking to maximize their travel, entertainment, and even business spending. It's been one of Warren Buffett's best investments, crushing the market for decades. Here's just how well AmEx has delivered for investors over the past few decades: 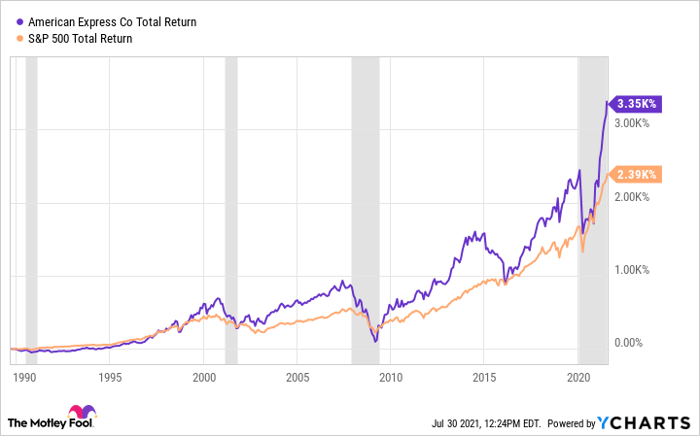 I'm also convinced that its best days aren't over, either, as the multi-trillion-dollar global payments market expands and global travel and entertainment rebounds to pre-coronavirus levels. There's another thing about the chart above that makes American Express appealing as a "buy on a crash" stock: It tends to fall more than the broader market during crashes, meaning the next crash it will almost certainly be on sale. But I don't think you have to wait for a crash to buy AmEx, either. At less than 20 times trailing and forward earnings estimates, you can pay a very reasonable price to own one of the best financial services businesses on earth today.

Jamal Carnette: Warren Buffett is the best investor of his generation and has the record to back it up. From 1965 through 2020, Berkshire Hathaway doubled the S&P 500's compound annual returns, with 20% versus 10.2%. It adds up: $10,000 invested in Berkshire would be worth more than $281 million today -- compared to $2.3 million invested in the broader index. It's clear Buffett rarely makes investing mistakes. That's why it was surprising to hear the Oracle of Omaha admit he erred when he bought International Business Machines in 2011 instead of Amazon (NASDAQ: AMZN). Buffett later expounded upon this decision by calling himself an "idiot" and admitting the buy was done by another Berkshire manager. Although shares are significantly higher than the price Berkshire paid when it first bought the stock, Amazon's recent sell-off has given new investors an attractive entry point. Amazon stock cratered on Friday after the company reported disappointing second-quarter earnings. Specifically, Wall Street was concerned about the company's growth prospects after the 27% year-over-year revenue increase fell below analyst estimates of a 29% rise. Additionally, third-quarter revenue guidance came in lower than expectations. However, some perspective is needed. Pandemic lockdowns were a significant tailwind to Amazon's e-commerce business and for its Amazon Web Services profit center. It's likely some growth was pulled forward, making 2021 a period of tough year-on-year comparisons. Despite that, the company is still overachieving in higher-margin segments like advertising and subscription services, which allowed the company to crush earnings expectations by 23%. Investors should be particularly encouraged by the performance of Amazon's "other" segment, mostly advertising, as it is growing nearly 90% and is already half as big as the AWS business. In the long run, consider this a speed bump; don't miss out on Amazon's long-term growth story.

This article was originally published on Fool.com. All figures quoted in US dollars unless otherwise stated. It's common knowledge among…

This article was originally published on Fool.com. All figures quoted in US dollars unless otherwise stated. As one of the world's…

This article was originally published on Fool.com. All figures quoted in US dollars unless otherwise stated. Streaming content pioneer Netflix…

Apple and the innovator’s dilemma

This article was originally published on Fool.com. All figures quoted in US dollars unless otherwise stated. Consumer product and technology…

This article was originally published on Fool.com. All figures quoted in US dollars unless otherwise stated. At first glance, it…