"Be greedy when others are fearful" has been one of the guiding strategic principles across Berkshire Hathaway's (NYSE: BRK.A) (NYSE: BRK.B) incredibly successful stock-picking run. With the novel coronavirus creating unprecedented conditions and heightened uncertainty, it might stand to reason that Warren Buffett, Charlie Munger, and the team at Berkshire would be snatching up discounted shares and jumping at the chance to acquire majority stakes in promising businesses.

Investors will get to see whether Buffett and Co. made any big buys in the first quarter when Berkshire publishes its 13-F filing in May, but signs point to the company keeping plenty of cash on the sidelines despite recent sell-offs.

"Be greedy when others are fearful" has been one of the guiding strategic principles across Berkshire Hathaway's (NYSE: BRK.A) (NYSE: BRK.B) incredibly successful stock-picking run. With the novel coronavirus creating unprecedented conditions and heightened uncertainty, it might stand to reason that Warren Buffett, Charlie Munger, and the team at Berkshire would be snatching up discounted shares and jumping at the chance to acquire majority stakes in promising businesses.

Investors will get to see whether Buffett and Co. made any big buys in the first quarter when Berkshire publishes its 13-F filing in May, but signs point to the company keeping plenty of cash on the sidelines despite recent sell-offs.

Rather than treating the current market conditions as an opportunity to be greedy with asset purchases, actions and statements from the Berkshire team appear to reflect a cautious approach. Here's why it looks like Buffett and Munger might not be rushing to buy during the coronavirus crisis.

Buffett wants Berkshire Hathaway to be safe for investors

Even prior to the circumstances brought on by the novel coronavirus pandemic, Berkshire Hathaway's decision to keep $128 billion in cash and short-term assets heading into 2020 signaled that the company was having a more difficult time finding investments that presented attractive value. The market is still well off the highs it hit at the beginning of the year, but it seems clear that Buffett and Munger aren't operating under the premise that stocks are at attractive levels for value-focused investors.

In a recent interview with The Wall Street Journal, Munger said that Buffett's goal is to have Berkshire Hathaway be safe for investors who hold 90% of their net worth in the company's stock. That means continuing to hold large cash reserves -- at least until there's better visibility about which businesses are well positioned for an economic climate that will likely see lingering impact from the novel coronavirus.

Munger also noted that he isn't seeing a rush of companies seeking investment from Berkshire and that the current conditions are well outside of most businesses' contingency plans. Here's Munger talking to The Wall Street Journal about the notable lack of companies approaching Berkshire for investment:

The typical reaction is that people are frozen. Take the airlines. They don't know what the hell's doing. They're all negotiating with the government, but they're not calling Warren. They're frozen. They've never seen anything like it. Their playbook does not have this as a possibility.

Based on Munger's comments, many companies appear to be holding off on seeking large-scale institutional investments or big new-debt outlays because they hope to receive some manner of bailout or stimulus from government bodies.

Recession is looming, and the road to recovery is less clear

Berkshire Hathaway's cautious, value-focused investment strategy has caused the company to underperform the S&P 500 index in recent years and attracted scrutiny from some analysts and investors, but the decision to keep a large cash position appears to have been a smart one. Munger views the prospect of a recession as a certainty -- and it's difficult to argue against that assessment. The famously successful investor also views some manner of recovery as inevitable, but the timeline and extent of the recovery are less certain.

Vaccines that are effective for coronavirus strains have been notoriously difficult to produce, and Munger thinks it's possible that the U.S. may never return to the record levels of employment achieved prior to the viral outbreak even after the economy sees substantial recovery. The Berkshire vice chairman expects business operations will eventually get back to an operating keel that's closer to normal and lead to a "moderate economy," but that premise doesn't seem to be serving as the foundations for a bullish outlook.

Despite the unprecedented conditions and high levels of uncertainty brought on by the novel coronavirus, the S&P 500 level is now at roughly the same range it was at in February 2019. Last year saw market risk factors and investor cautiousness centered around the trade war between the U.S. and China, but it's difficult to make the case that the broader economic outlook isn't more fraught at present.

If the beneficial impact created by stock buybacks is factored out, earnings growth for S&P companies was unimpressive last year -- even non-existent according to some estimates. It's also worth pointing out that the trade truce reached between the U.S. and China at the end of 2019 always had the potential to fracture, and many analysts and government figures appear to believe that the conditions brought about by the coronavirus pandemic will lead to worsening relations between the world's two largest economies. 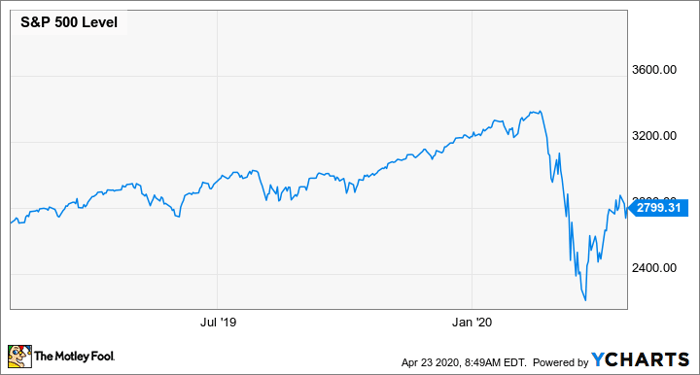 Government actions to bolster the economy may have consequences

Given the scale at which major world economies have reduced operations and the scope of uncertainty about what lies ahead, the stock market has been remarkably resilient. Part of that resilience stems from the U.S. Federal Reserve and other financial bodies paving the way for big investments into the market. These investments have had the effect of buoying equity prices, and it's likely that investor confidence in the government's financial response is also a factor in the market being relatively sturdy. However, Berkshire seems to have concerns that the stimulus efforts could have unintended consequences and create additional economic volatility.

Speaking to WSJ, Munger said, "I don't think we'll have a long-lasting Great Depression. I think government will be so active that we won't have one like that. But we may have a different kind of a mess. All this money-printing may start bothering us."

With Fed interest rates already cut to zero, the U.S. central bank has reduced flexibility on the lending front, and the extent to which quantitative easing and other stimulus measures will be able to support the market, as many businesses remain in states of shutdown or limited operation, remains to be seen. Predicting the broader economic trajectory has taken on new layers of complexity, and while more adventurous investors may be rewarded for their willingness to take on risk, Charlie Munger and Warren Buffett have sound foundations for taking a cautious approach.

Where do value investors go from here?

With dramatic swings in the market and volatility for oil and other commodities, it's become much more difficult to make well-founded prognostications. Buffett and Munger are value investors at heart, and the current climate presents a range of new challenges when it comes to valuing a company based on fundamentals.

In assessing potential investments, Munger and Buffett have had a policy of separating out cases presenting questions that are simply too difficult to answer. Conditions resulting from the novel coronavirus have dramatically increased the number and significance of unknowable variables, and that's likely a big impetus for Berkshire continuing to keep cash on the sidelines and reduce stock holdings in the highly impacted airline industry.

Things like debt load and cash on hand can still provide investors with valuable insights about the health of a company, but the utility of trailing revenue, earnings, and free cash flow metrics has been greatly diminished -- and charting future performance has become much harder. With the stock market proving relatively resilient despite large-scale economic shutdowns, it could actually be the case that Buffett and Munger believe the market is being greedy at a time when some degree of fear is justified.