Despite tough odds, plenty of doubters, and regular criticism over its actions, Tesla (NASDAQ: TSLA) has developed into the leading manufacturer of electric vehicles globally. The automaker has grown rapidly, and so has its share price. This has led management to announce a 3-for-1 stock split sometime later this year to make its stock more accessible to retail investors.

The decision to split the stock in 2022 comes not all that long after a 5-for-1 split in late August 2020, which reduced its price per share from around $2,300 to roughly $444. Like all stock splits, the increase in the number of shares and the resulting share price drop doesn't actually change the intrinsic value of each share or of the company overall.

Since that last split, Tesla's stock price has risen by about 64% to $725, thanks in part to the company's strong operational performance. If the 3-for-1 split occurred today, each share would be further reduced to a new price of roughly $242.

Here are three reasons why that share price is likely to continue moving higher once the split is done.

Tesla has faced challenges meeting the demand for its vehicles in the past because of production constraints. In fact, despite the company's incredible growth, a lack of manufacturing capacity has actually slowed it down. However, that might be about to change with the opening of two brand new gigafactories -- one near Austin, Texas, and the other in Berlin, Germany.

The new additions will take Tesla's manufacturing capacity to 2 million vehicles per year from 1.05 million previously. Unfortunately, the company still has to contend with supply chain issues for raw materials and components like semiconductors, which is a problem all car makers are currently facing. But once that resolves (and it will), the below chart should continue to show a strong ramp-up. 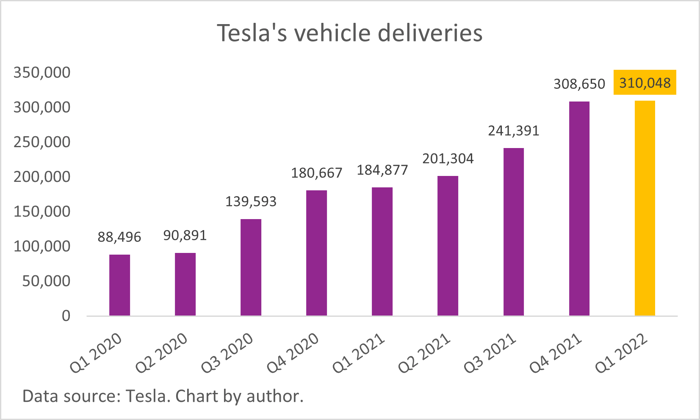 A gross profit margin is simply a company's revenue (sales) minus its cost of goods. In Tesla's case, its automotive gross margin would factor in the price of the car, less the direct cost of making the car. It would include costs such as the raw materials required to build each vehicle, but it wouldn't count marketing or money spent on research and development -- those are operating expenses.

As Tesla builds more cars, its gross margin increases. Why? Because of a phenomenon known as "scale." If Tesla builds a factory that can manufacture 500,000 cars, but it only produces 50,000, it would lose money because it's absorbing the costs of that extra capacity without actually using it. When it produces all 500,000 cars, its fixed costs are at the smallest possible percentage of its revenue, which leads to a higher gross margin.

Since Tesla has been delivering a record number of vehicles, its gross margin has consistently climbed higher, and it's now sitting at the best level in the company's history. 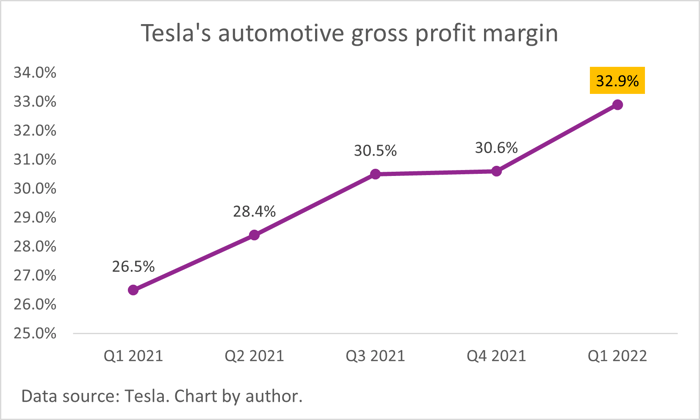 Net income is a metric most investors watch closely. Put simply, it's the company's bottom line, or profit. It's also important because when it's divided by the number of shares in circulation, it becomes earnings per share.

Many pundits predicted Tesla would never reach profitability because making cars is difficult and expensive. Even some of the best car makers, like Ford Motor Company (NYSE: F), can only muster a gross profit margin of around 15%, but Tesla has developed industry-leading processes for producing electric vehicles, and the quality of the finished product allows for premium pricing.

Tesla's gross margin of 32.9% leaves far more room for operating investments like the design of new products and the development of innovative new software technologies like autonomous driving, which can help keep the company ahead of its competitors. But more importantly, the high margin results in more money flowing to the bottom line, and in the first quarter of 2022 alone, Tesla generated over $3.3 billion in net income. 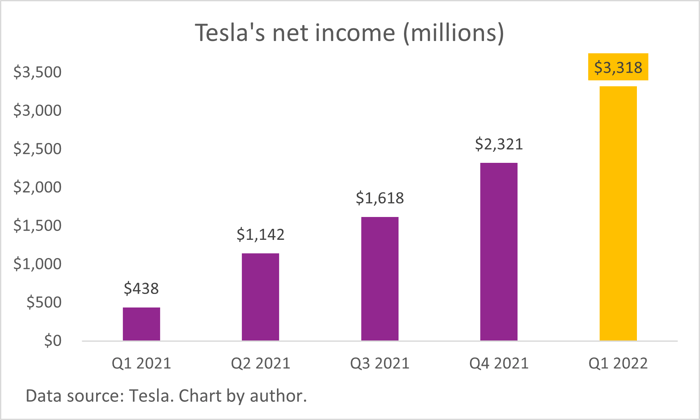 To be clear, Tesla doesn't need its upcoming stock split in order to create more value for investors. At most, it might broaden the shareholder base by inviting new, smaller investors into the fold, thanks to the more affordable price per share. The company's rapid expansion of manufacturing capacity and consistent profitability are the items that will continue driving its stock higher both before and after the split.

But for investors wondering when the stock split might take effect, it's likely to happen after Tesla's annual shareholder meeting in August, where the move will be voted on.

Turn an economic crisis into opportunity with these investing strategies.

Tesla will be splitting its stock... again. Here's what we know.

Why Tesla and other EV stocks rocketed higher in July

A combination of solid earnings and investor optimism has many of the year's losers seeing some gains.

The iPhone maker has its eye on another revenue stream.

Why Tesla shares bounced ahead of its stock-split vote

The market will find out Thursday if shareholders have approved the electric vehicle company's 3-for-1 stock split.

Here's why Netflix gained nearly 30% last month, and why the stock still has room to run much higher.

Why did the Nasdaq share price rocket 19% in July?

The financial stock surged on strong earnings, among other factors.