Stock splits generate a ton of excitement among investors. A stock split does not directly affect the value of an investor's holdings but opens up other opportunities. There is often a lot of stock-price movement around the announcement and split dates. But what about afterward? Once the excitement dies down, the stock will start trading on economics again. With this in mind, which of these juggernauts is the better long-term play?

Alphabet (NASDAQ: GOOG) (NASDAQ: GOOGL), the parent company of Google, and Tesla (NASDAQ: TSLA) are on the clock, with Alphabet's 20-for-1 split coming up on July 1 and Tesla's date still to be determined. Tesla will hold its shareholder meeting on August 4th when it is expected a 3-for-1 split will be approved. The execution of the split will likely follow shortly after. Based on recent prices, Alphabet will trade in the range of $115 per share and Tesla around $240 per share post-split. This could change drastically in today's topsy turvy market, of course.

What is the outlook for Alphabet?

The company followed up this performance with a strong first-quarter 2022 in which sales, cash from operations, and EPS increased year over year. But what about the future? With a potential recession around the corner, investors are rightly concerned that ad budgets will be cut, which could hurt Alphabet's results.

Alphabet has a few aces up its sleeve to weather an economic slowdown. First, Google Search currently holds a market share of over 85%, according to Statista. The Federal Trade Commission (FTC) believes it is a monopoly, but unless Congress passes comprehensive legislation, Alphabet will continue to dominate. This gives the company tremendous pricing power, which is critical to maintaining profitability.

Alphabet also has two other fast-growing revenue streams in YouTube and the Google Cloud. YouTube revenues spiked 46% in 2021 partly due to people staying in more due to COVID-19. The growth slowed to 14% year over year in Q1 2022 as the pandemic waned, but the upward trend remains.

Google Cloud may be the most important segment to watch moving forward. This segment competes with Amazon's Amazon Web Services (AWS) and Microsoft's Azure. Cloud computing is expected to continue its explosive growth in the foreseeable future. Sales for Google Cloud grew 47% in 2021 to $19.2 billion. The rub is that this segment isn't profitable, while AWS produces enormous operating profits for Amazon. If Alphabet can scale to profitability, it will be a giant boon for profits and shareholders.

On the valuation front, Alphabet trades for its lowest price-to-earnings (P/E) ratio since the beginning of 2019, as shown below. 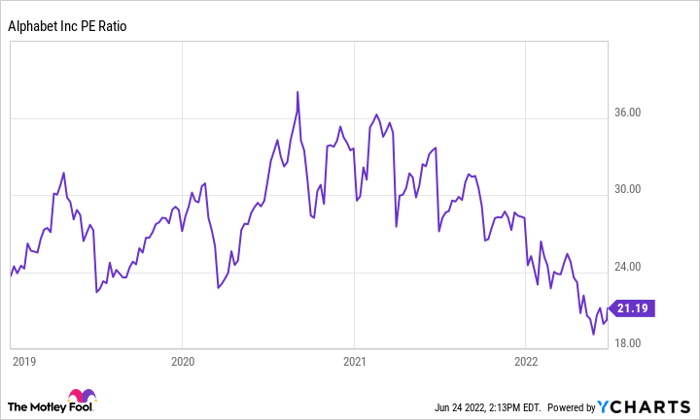 Even if the company experiences short-term headwinds, this price looks enticing for long-term investors.

What is the outlook for Tesla?

Let's face it, whatever we think of Tesla's valuation (it's high!) or outspoken CEO Elon Musk (he's polarizing!), the company's rise has been absolutely phenomenal. And shareholders have been richly rewarded. An investment of $10,000 in Tesla stock 10 years ago would be worth over $1 million today, while the same investment five years ago would be worth more than $95,000.

There are positive and negative factors on the horizon for Tesla. Gas prices are shocking Americans at the pump. This could lead many to consider an electric vehicle maybe for the first time. Tesla is experiencing massive demand already, with many cars sold out until 2023.

The big question is whether this demand can continue in a potential recession. 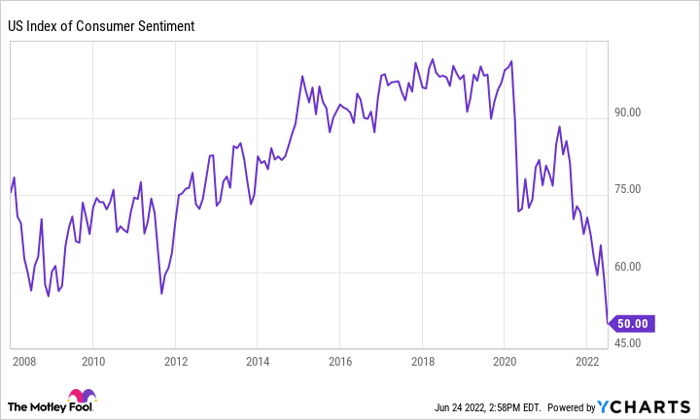 US Index of Consumer Sentiment data by YCharts.

Competition is heating up. For years, Tesla has enjoyed an incredible first-mover advantage. Tesla was laser-focused on electric vehicles while other automakers scuffled along. That's changing quickly as traditional automakers invest billions in electrifying large parts of their fleets in the coming years.

The final concern is the valuation. Tesla has a larger market cap than the following seven largest automakers combined. Tesla crushes most of these on growth and profitability, and investors have been willing to pay a premium on the stock for years. Still, caution is warranted with an economic storm on the horizon. Companies with high valuations may fare worse than others.

Which has the stronger bull case?

Alphabet has a few advantages over Tesla in an inflationary environment and with an economic slowdown likely. Alphabet relies on business spending while Tesla relies on consumers. Business spending may prove more durable because advertisers must continue to invest to grab limited consumer dollars. Due to inflation, Tesla also has to contend with rising costs for raw materials. One of Tesla's draws is its profitability, and its margins could be crimped. A manufacturing company will be more affected by this than a tech company.

This all adds up to Alphabet stock being the better bet currently. That said, Tesla likely has a higher long-term ceiling but much more risk. Long-term investors could consider both stocks and weigh them according to their risk tolerance.