Supply chains are already stressed for automakers across the world. Given demand for electric vehicles (EVs) is expected to grow by leaps and bounds, that is likely to get worse, with EV batteries widely believed to become the bottleneck.

Tesla (NASDAQ: TSLA) has been leading the sector in all areas so far, and it plans to continue that role if a raw material supply crunch develops. Tesla builds its own cells at its Gigafactories, recently introducing its 4680 battery in cooperation with Panasonic. But this week it seems to have taken another step to ensure its battery supply with plans to source from an EV competitor.

While Tesla led the world with sales of more than 900,000 electric cars last year, China-based BYD sold over 600,000 electric vehicles of its own, including both plug-in hybrid and battery electric. Now it seems Tesla will be using BYD as a battery supplier, too. The tie-up would link two EV leaders that combined to sell more than one-third of all battery electric vehicles worldwide last year. 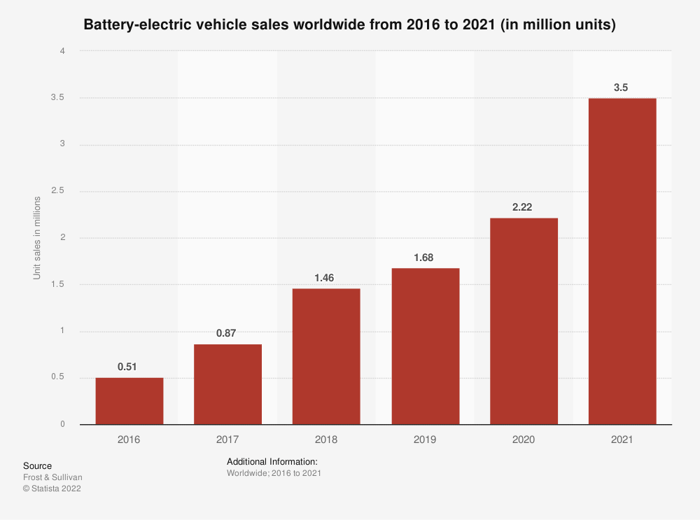 Tesla and BYD are the world's leaders in battery-electric and plug-in hybrid vehicle sales.

Many observers think it will be hard for Tesla to remain the world's dominant EV seller with automotive giants General Motors, Ford, Volkswagen, and Toyota quickly ramping up EV production. The crowded field will be fighting to keep its battery supply chains full. Rivian Automotive CEO R.J. Scaringe recently said in his annual letter to shareholders that over the next decade, global battery production capacity will need to increase by 20 times to supply the expected demand.

Tesla plans to stay ahead of the competition by adding BYD as a supplier for lithium-iron-phosphate (LFP) batteries, according to a Reuters report. Tesla disclosed that LFP made up nearly half of batteries used in its vehicles produced in the first quarter. They are potentially a safer and cheaper rival to nickel-and-cobalt-based lithium-ion batteries.

BYD launched its LFP Blade battery two years ago. Battery sales only made up 7.3% of total revenue for BYD in 2021, but now Tesla may become a customer and help that figure grow.

Tesla had already begun forging relationships with South Korea's LG Energy Solutions and China's Contemporary Amperex Technology (CATL) for its LFP battery needs. BYD isn't nearly as big a player in the EV market as those other Asian companies. But that may soon change due to a relationship with Tesla. 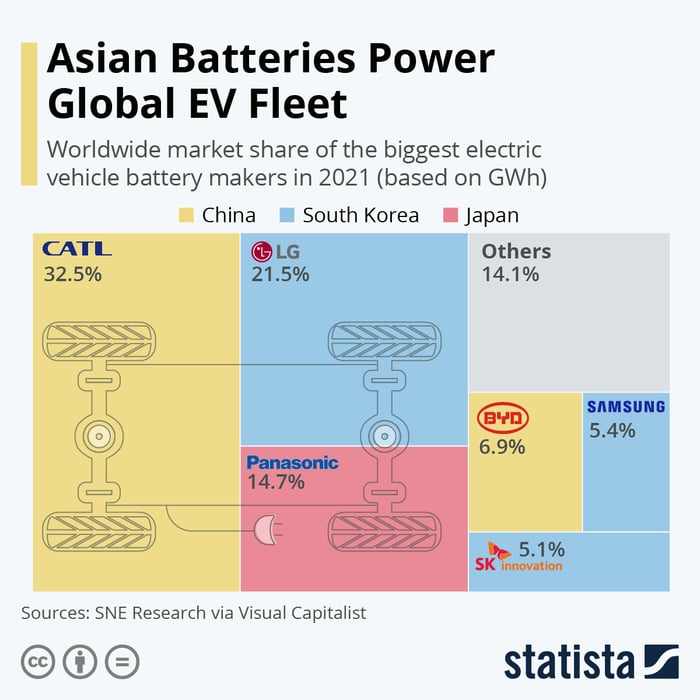 BYD may become a bigger player with a customer in Tesla.

The report quoted Lian Yubo, BYD's executive vice president, as saying in an interview this week, "We are now good friends with Elon Musk because we are preparing to supply batteries to Tesla very soon." If that pans out, Musk won't be the only famous billionaire to be attracted to BYD. Warren Buffett's Berkshire Hathaway has been a longtime investor in the Chinese EV company, and it held a 7.7% stake worth nearly $7.7 billion as of Dec. 31, 2021.

While a relationship between the two automotive leaders may be a positive for both companies, Tesla could become the big winner. The company now has four global manufacturing plants. An adequate battery supply could be the critical factor to be able to maximize production from those facilities to supply growing demand. The takeaway for investors is that Tesla seems to have things in place to continue dominating even as fierce competition enters the market. It makes the company's estimate of 50% annual production growth over multiple years more viable.