In the early months of the COVID-19 pandemic, Netflix (NASDAQ: NFLX) benefited from a huge wave of new subscriber signups, as people looked for things to do at home during lockdowns. However, subscriber growth has been slowing ever since that initial surge cooled off in the spring of 2020.

Last week, investors finally lost their patience. Weaker-than-expected fourth-quarter subscriber growth and a fairly dismal forecast for the first quarter caused Netflix stock to plunge 22% on Friday. Yet this pullback could make Netflix an attractive value stock in 2022.

In short, Netflix expanded at a much slower pace in 2021 than it did before the pandemic. Its growth slowdown looks even more dramatic in percentage terms. In 2021, Netflix grew its paid streaming subscriber base just 9%, compared with a 26% increase in 2018.

Despite clear signs that growth was slowing, Netflix executives spent most of last year arguing that the deceleration in subscriber growth was temporary.

Management finally acknowledged the obvious in conjunction with the company's Q4 earnings release. Netflix reported 8.3 million paid net subscriber additions for the fourth quarter -- slightly below its Q4 2020 performance and its forecast -- and it expects to add just 2.5 million subscribers in the first quarter (down from 4 million a year ago). CFO Spence Neumann said that subscriber retention has been healthy but the pace of new member acquisitions hasn't recovered to pre-pandemic levels.

Investors punished Netflix stock viciously for the subscriber miss. Barely more than two months ago, the shares hit an all-time high of $700.99. The stock had already retreated to just above $500 before Netflix's earnings report, largely because of a broader sell-off in high-flying tech stocks. Netflix stock dropped another 22% after the earnings report, pushing the shares below $400 for the first time in almost two years. 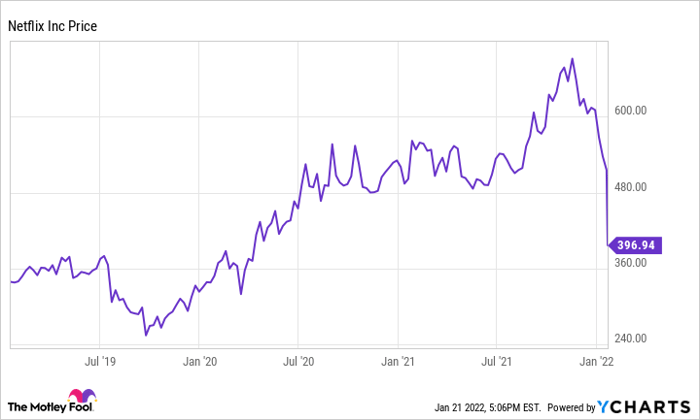 The abrupt pullback is hardly surprising in light of Netflix's recent results and forecast. For many years, Netflix has been valued as a growth stock. Now, investors have to reckon with the fact that Netflix may be close to saturating many of its markets. If the company's Q1 guidance is any indication, subscriber growth could moderate again to roughly 6%-8% this year.

To be fair, price increases should keep Netflix's revenue growing at a double-digit rate in 2022. (Netflix is raising the prices of most plans by 10% to 11% in the U.S. and Canada this quarter.) But that was a small consolation to investors, as Netflix risks further handicapping its subscriber growth if it raises prices too much.

Could Netflix be a good value stock?

While Netflix is falling out of favor with growth-focused investors, it is starting to gain merit as a value stock. Despite its somewhat disappointing subscriber gain, Netflix posted earnings per share (EPS) of $1.33 last quarter, easily beating its guidance and the analyst consensus of $0.82. This brought its full-year EPS to $11.24.

Netflix expects its operating margin to retreat somewhat in 2022 -- largely due to exchange rate pressures -- following several years of extremely strong margin expansion. Still, margin expansion will likely resume in 2023. Even with slower subscriber growth, the operating leverage inherent in Netflix's business model should enable the company to grow revenue faster than expenses for the foreseeable future.

Netflix stock's recent plunge has left it trading for just 35 times the company's 2021 earnings. While that still represents a premium to the market, it's a far cry from a year ago, when the stock traded for over 80 times earnings. 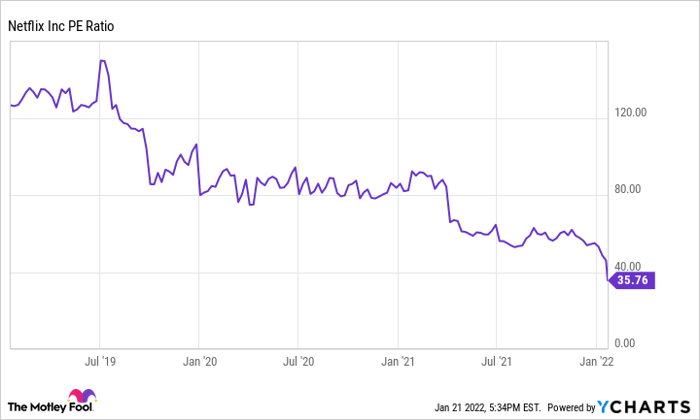 Looking ahead, earnings growth and free cash flow may become more important drivers of Netflix stock than subscriber gains. If the company can keep its costs under control, the stock could perform well for a new crop of value investors even if subscriber growth never reaccelerates.