China’s growth is slowing, and world sharemarkets are concerned. But fear not. A billion new Chinese consumers will pick up any slack, writes The Motley Fool

Chinese premier Wen Jiabao raised eyebrows last week in a speech at the National People’s Congress, the annual meeting of China’s legislature. In opening remarks, Wen signaled his country’s decision to lower its targeted economic growth rate to 7.5% after maintaining an 8% goal for the last seven years. While the announcement sent tremors through world sharemarkets, for the reasons I discuss below, the concern is not only misplaced, but outright wrong.

Why the concern is misplaced
Even assuming that China’s output is beginning to moderate, it shouldn’t come as a surprise to anybody. Put simply, China is no longer an emerging economy. It has emerged and now boasts the second-largest economic engine in the world. With this in mind, a 7.5% growth rate doesn’t seem so bad. The last time Australia even approached that was 1970, when we recorded an annual GDP growth rate of 7.16%. Nowadays, we’re lucky to hit 4%.

The story is the same with the United States, Japan and Germany, the world’s largest economies in terms of output. The US last grew above 7% in 1984.  In the last 40 years, Japan’s growth rate hasn’t passed 7.5%, and Germany hasn’t come close. Its highest rate over this time period was a nonetheless impressive 5.26%, which it recorded in 1990. Indeed, even a bona fide emerging economy like Brazil is hard-pressed to achieve such a notable target. The last time it did so was in the mid-1980s. 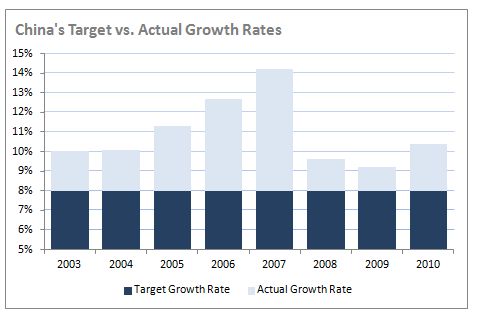 Not to mention, all this is assuming that premier Wen’s economic forecast will turn out to be accurate.

To test the likelihood of this, we need only look back over the last eight years during which the benchmark growth rate was 8%. And as you can see in the figure above, the actual growth rate exceeded the benchmark in all eight of the pertinent years. Even in the depth of the Great Recession, in fact, China still managed to eke out 9.2% growth.

Mind you, as mentioned previously, this is 2 percentage points higher than the United States’ fastest growth rate in the last 40 years. Thus, while not trying to minimise the potential consequences of a dramatically downshifting China, as that would be a disaster for the world economy, Premier Wen’s speech shouldn’t be taken as such.

Why the concern is outright wrong
At the same time that the mainstream media obsessed over the nominal decrease in China’s targeted growth rate, they almost entirely overlooked the most important part of Wen’s remarks — namely, that the decreased rate is only one part of a much broader shift in the Chinese economy, away from exports and toward greater domestic consumption. This news couldn’t come at a better time for Western economies.

In the five years between and including 2006 and 2010, for example, China’s average annual current account balance exceeded $300 billion — the current account is a proxy for trade. Over the same time period, the United States’ balance was negative $600 billion. In short, this amounts to an enormous transfer of wealth between the two countries. And the net result is the US has more than $14 trillion in national debt, whereas China has over $3 trillion in foreign currency reserves.

While this imbalance was initially caused by an abundance of cheap labor in China, it’s been maintained by a policy of currency manipulation. By keeping the yuan artificially cheap relative to other currencies, China has effectively subsidised its export industry — much to the detriment and consternation of other countries.

The announced shift in favour of domestic consumption, in turn, portends a shift in this policy as well. To maximize its constituents’ buying power, in other words, it will now be in China’s interest to allow the value of the yuan to appreciate — which the country has begun to do in the last few years.

Thus, at the end of the day, the issue isn’t so much about what the world will lose if China’s growth rate decreases by half a percentage point, but rather what it will gain when over a billion new consumers come online. According to the CEO of Yum! Brands (NYSE: YUM) , for example, “China is the biggest retail opportunity in the 21st century.” Its competitor McDonald’s (NYSE: MCD) plans on opening a staggering 700 more outlets in China by 2013. And Starbucks‘ (Nasdaq: SBUX) 500 Chinese locations are already more profitable per outlet than in the United States.

Foolish bottom line
For the investor, the important thing to note here is that the market’s initial reaction to the news from China should not be interpreted as the beginning of an ominous turn in the world economy. Indeed, if anything, it only lends credibility to the optimistic opinions of those like Warren Buffett who believe that our best days are still ahead.

A version of this article was originally published on Fool.com