Motley Fool Australia » Investing » After Steve Jobs, How Does Apple Carry On?

Yesterday, the sad news that Steve Jobs had passed on hit the newswires. An outpouring of grief has followed; few leaders have had the transformative impact of Steve Jobs.

His turnaround story and “second act” at Apple (Nasdaq: AAPL) will forever be remembered as one of the greatest examples of vision and leadership. As we said in a tribute to Steve Jobs, “One reason that might explain why we feel so close to him is that he had an uncanny ability to access the deepest recesses of our minds and imaginations, even without knowing us individually.”

Beneath is a timeline showing the amazing string of successes achieved after Jobs took back over as CEO in 1997.

While it’s difficult to transition to thinking about the future of Apple so quickly after the passing of Steve Jobs, it’s also a company on which many people have pinned their own hopes and dreams. Apple is worth $350 billion. Many people, both in the U.S. and here in Australia, have bet on Steve Jobs’ vision.

Why Apple will continue performing without Steve Jobs
Apple’s a much different creature than it was only five or 10 years ago. Even though the media stays anchored on Apple as a “hit-driven” company needing to constantly reinvent the wheel, this isn’t a fair characterisation.

Today, more than 70% of Apple’s sales — and a greater percentage of profits — come from its mobile platform, iOS. Having a strong mobile platform with plenty of developer support is actually Apple’s greatest achievement.

Both the iPhone and iPad have large and growing addressable markets ahead of them, meaning their slice of Apple’s sales pie should only keep growing in the years ahead. Not only that, but they’re still hitting new ways to distribute, in regions like China, for example.

What’s important to remember is that Apple not only understands consumer behaviour so well — and used that understanding to redefine MP3 players, laptops, smartphones, and even tablets — but it also has a key understanding of branding.

Other smartphone makers largely associate their goodwill with esoteric names like “The Galaxy S2” that get promoted before the company. While one phone might be a success, continuing dominance is fleeting between product lines with different names.

However, Apple has long-lived product lines that are consistently named and associated with the company itself. The iPhone 4 has two main points of emphasis on its back. The Apple logo and the word “iPhone.” There’s no mention of iPhone version “X,” just the long-lived iPhone brand.

Apple isn’t a cutting-edge technology company anymore. Sure, technology is important and so are new innovations like the iPhone 4S’ integration of Siri. But the key driving factor in Apple’s success is that it has become an aspirational brand associated with prestige and quality.

What threats remain
Still, threats remain. The largest threat to Apple right now is reduced nimbleness because of size. There are only five technology companies in the world with higher sales than Apple.

By the end of next year, Apple should be at least the second-largest company in the technology industry despite selling high-margin “end of the value chain” products. There’s simply no precedent for what the company’s doing.

This size presents challenges in addition to the opportunities like scale discussed above. For example, Apple’s recently unveiled iPhone 4S makes few external design changes. That could be in large part because Apple already has its Asian supply chain so well set up to produce the existing iPhone 4. An update like adding a larger screen would have presented additional complexities and possible launch delays.

In the reality of its new size, Apple may increasingly have to make concessions to aid the major ramp up of new product lines. That may come back to haunt the company.

When you’re selling a top-line brand, consumers are often buying on prestige and their ability to distinguish themselves. Apple selling an iPhone 4S without any design tweaks might not fundamentally alter the phone’s performance, but it could turn away buyers hoping for a product that distinguishes them as having the “newest, greatest thing.”

Apple will likely still sell record numbers of iPhones this Christmas holiday season and will show few negative signs from not changing the design of the iPhone 4S. However, it does ramp up the company’s need to “wow” consumers when the iPhone 5 hits. That’s a longer-term threat for investors to keep their eyes on.

The Foolish Bottom line
The key idea is that Apple’s momentum should remain in place without Steve Jobs. In the long run, no one can replace the complete package Steve Jobs brings to the table, but Apple has an excellent mobile platform that can easily be moved in new directions like home entertainment.

Challenges remain ahead, so know where to keep an eye out. However, trading at just 15 times earnings with $76 billion in the bank, Apple shares still look like good value.

This article contains general investment advice only (under AFSL 400691). Authorised by Bruce Jackson. 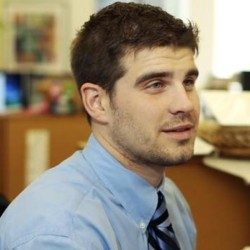