If you want to outperform the market over the long term, buy stocks in growing companies that generate high and/or rising returns on invested capital (ROIC) at fair or better valuations. 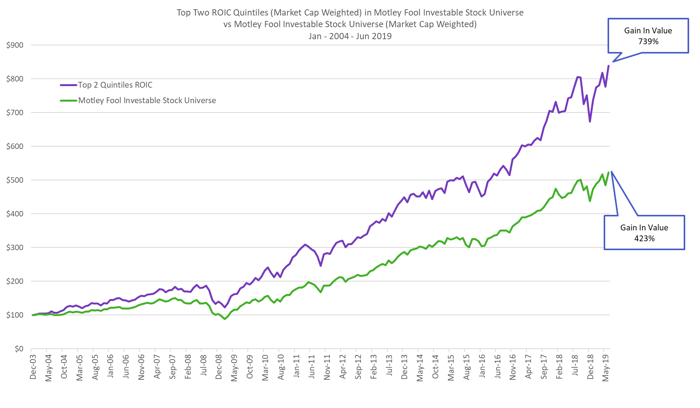 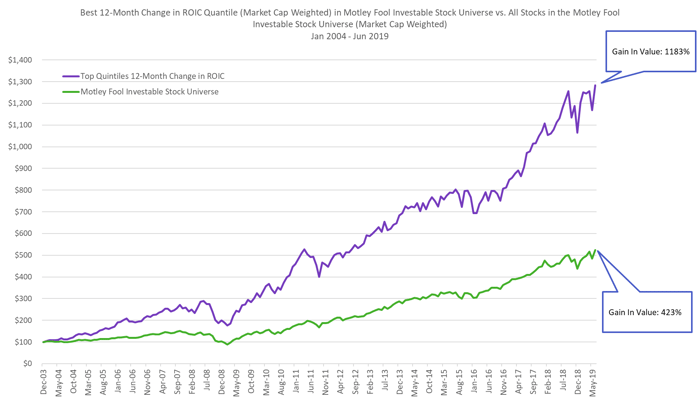 Adapted from McKinsey & Co. book Valuation: Measuring and Managing the Value of Companies.

As the first two charts above clearly show:

This is because ROIC is the most important financial metric. It is the ultimate measure of profit and performance and a main driver of free cash flow (FCF), which is ultimately what we are after as investors.

Here's a simple formula to show you just how powerful ROIC really is. That formula is

The company with the higher ROIC has a lower reinvestment rate and will need to reinvest less capital to achieve the same level of earnings growth. And because the higher-ROIC business requires less capital (or reinvestment) to grow, it generates higher free cash flow (FCF), and free cash flow is what determines intrinsic value. Mathematically, companies with higher ROIC generate more FCF per dollar of earnings.

Let's all say that together: Businesses with higher ROIC generate more FCF per dollar of earnings, and growth of free cash flow is what drives growth of intrinsic value!

Because these high-ROIC businesses generate so much FCF, they can finance their growth internally rather than relying on outside capital (other people's money) to grow. This means less debt or less equity dilution for shareholders. They can invest more in fortifying their moats. They can invest in new initiatives to build new moats and new profitable growth streams over time. They can invest in taking care of stakeholders, including employees, customers, suppliers, communities, and the planet. They can set their own time frames, remain adaptable, and future-proof their businesses.

Finally, some of the excess FCF can be used to pay down existing debt, and what's left over will sit on the balance sheet to build up an even larger net cash position (for many of our companies at least), which further strengthens the balance sheet and builds optionality.

Before moving on from the formula, it's important to point out that a company cannot grow operating profit faster than its incremental ROIC without taking on outside financing. Basically, a business that generates an ROIC of 20% can't grow operating profit faster than 20%, and to do so, it must reinvest 100% of its profits (20% x 100% = 20%). Remember this the next time you hear that so-and-so company can sustainably grow earnings at 40% or 50%. The answer is that it probably can't without taking on outside financing.

But an increase in revenue growth does not always increase intrinsic value. Growth only increases business value if a company's ROIC is greater than its weighted average cost of capital (WACC).

If ROIC = WACC then growth neither creates nor destroys value.

This is why return on invested capital is more important than revenue growth...an increase in ROIC is always value added, but an increase in growth can actually destroy value, which is a big reason you're seeing some profitless growth stocks blow up and fall 50% to 70% or even more.

Now, if ROIC is high, a percentage-point increase in revenue growth creates more value than does a percentage-point increase in an already-high ROIC. So when ROIC is high, companies should focus on growth and can even sacrifice some ROIC to drive growth (yes, some modest decline in ROIC can be a good thing). But when ROIC is low, a company must focus on increasing its ROIC (to get it above the WACC) before it shifts into growth mode.

Don't overthink it. Understand the basics of intrinsic value growth! Focus on finding companies with strong balance sheets, high or increasing ROIC, and growing FCF, and then just don't pay too much.

At the end of the day, FCF growth, what we pay for it, and having the proper mindset are pretty much all that matter for long term market-beating returns.