We're in the heart of earnings season, with the mega-cap technology stocks all set to report first-quarter results this week. With trillions of dollars in market cap, these are the most important earnings results to determine the health of the U.S. economy and financial markets. Alphabet (NASDAQ: GOOG), the parent company of Google, YouTube, and Android, reported its Q1 earnings after the market closed on April 26. The report looked good, but investors decided to sell off the stock Wednesday because the company fell short on earnings per share and revenue estimates.

Given the latest earnings report and the recent stock performance, is it a good time to buy shares?

For the first three months of 2022, Alphabet generated $68 billion in revenue, up 28% year over year. The company continues to show strong levels of profitability, with operating income of $20 billion, equating to an operating margin of 30%. Google Search is still the majority of Alphabet's business, and contributed the most to its growth in Q1 of 2022, with revenue jumping from $31.9 billion a year ago to $39.6 billion this quarter. It also got solid contributions from Google Cloud, which grew revenue 44% year over year to $5.8 billion.

Alphabet has phenomenal profit margins, but it is still investing like crazy to grow its business. For example, on the conference call management said it would be investing $9.5 billion in office space and data centers over the next year, and that the company has spent $40 billion on research and development (R&D) over the past two years. If Alphabet can get a return on these new employee hires and all this R&D spending, it will hopefully keep revenue growing at a double-digit rate for the foreseeable future.

Valuation and buybacks make for a great combination

Over the last 12 months, Alphabet has generated $69 billion in free cash flow. This comes while the company is making major capital investments (mentioned above) and it is burning approximately $1 billion a quarter each on Google Cloud and Other Bets. With a market cap of $1.5 trillion, the stock trades at a trailing price-to-free cash flow (P/FCF) of 21.7. This is lower than the average stock in the Nasdaq Composite Index and would be even lower if management decided to stop investing for growth in its Google Cloud and Other Bets.

Alphabet is also returning cash to shareholders through share repurchases. In Q1 alone, it spent $13.3 billion on share buybacks, and it has reduced its share count from around 690 million a few years ago to 660 million today. This helps remaining shareholders by increasing free cash flow per share. In conjunction with its Q1 results, Alphabet announced a new $70 billion share repurchase program, so investors should expect the share count to continue to fall over the next few years. 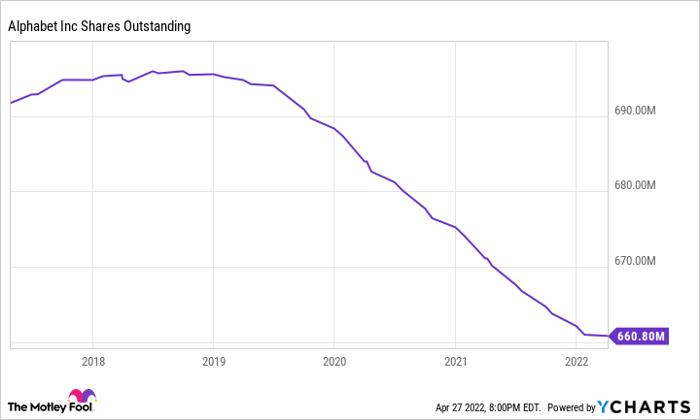 So should you buy shares?

Investors are concerned about Alphabet's stock right now for a few reasons. First, Other Bets continues to lose money at a rate of about $1 billion a quarter. And at Google Cloud, revenue continues to grow quickly but operating leverage is not yet showing up, with the division putting up a $931 million operating loss in Q1. On top of this, YouTube's revenue growth slowed down to only 14% in Q1 because of competition from TikTok and a reduction in time spent on video with pandemic restrictions loosening.

But here's the thing: The core Google business is so profitable it doesn't matter if Google Cloud and Other Bets continue to lose money. At a P/FCF close to 20, a steady share repurchase program, and the core Google business growing at 10%-plus a year, Alphabet stock will be much higher five years from now, no matter what is happening in its other divisions. That makes the stock a buy right now on this post-earnings dip.