Zoom Video Communications Inc (NASDAQ: ZM) has gone shopping: It has announced plans to drop $14.7 billion to acquire cloud-based contact centre Five9 Inc (NASDAQ: FIVN). The move will launch Zoom into a new arena, bringing into more direct competition with the likes of Twilio Inc (NYSE: TWLO) and other communications services outside internet-based videoconferencing. And after several decades of expansion, mobile telecommunications companies are under attack from cloud-based software firms that are expanding on the possibilities beyond what a phone is able to accomplish. Here are three ways Zoom's announcement shakes up the industry. 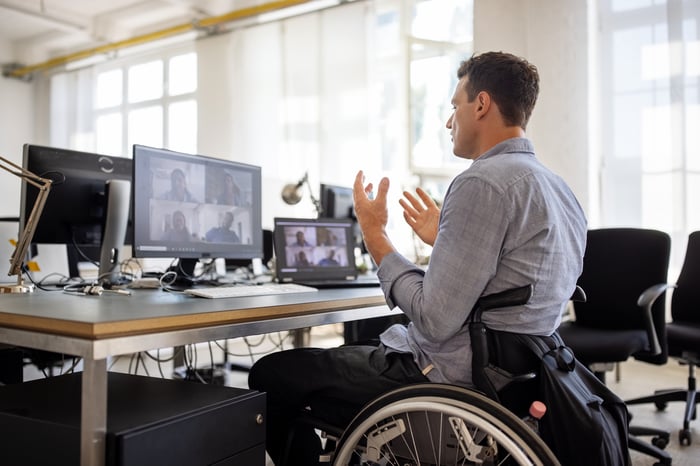 Zoom was already a pretty big business before COVID-19, but it's exploded since the start of the pandemic and is a top dog in the cloud-based communications space. It generated revenue and free cash flow of $3.28 billion and $1.59 billion, respectively, over the past year, a 48% free cash flow profit margin. Adding Five9 to the mix increases that lead. While not the highly profitable company Zoom is, Five9 generated $478 million in sales and $38.1 million in free cash flow over the last 12-month stretch. This is a good complement for Zoom's high-growth operation. Five9's trailing 12-month revenue is double where it was three years ago, and it could get a real boost once integrated into the videoconferencing fold and marketed to the hundreds of thousands of business users Zoom already touts having.

2. Video conferencing is a new standard feature to build around

Video chat has become a day-to-day staple for millions around the world in the past year, and Zoom has benefited from this trend like no other. But video isn't the only way people stay in touch via the internet. Twilio has built its own cloud-based software empire offering not just video integration but also email, text, online chat, and customer satisfaction analytics into one convenient package. Twilio is considered a pioneer and the leader in the cloud-based communications industry, often referred to as a communications platform as a service (CPaaS). Its flagship product is Flex, designed as a customisable contact centre to help an organisation manage all of its inbound and outbound communications. This is a big and growing space, and even when hauling in an industry-best $2 billion in sales in the last year, Twilio is still relatively small compared with the trillions of dollars spent with telecom companies every year around the globe. Zoom already dominates in video, but adding Five9 will round out its software suite with a similar contact centre CPaaS offering that comes complete with voice, text and chat, email, and analytics. In its acquisition announcement, Zoom said it thinks the current contact centre market is worth some $24 billion a year. Adding Five9 to the mix builds on its lead in video and could help jump-start Zoom Phone, which it started a couple of years ago to directly address its business customers' more traditional telecom needs.

3. Zoom gets to keep its cash hoard

Whenever a new high-growth and high-profit industry pops up, it attracts lots of competition. Video, cloud communications, and CPaaS is no exception. Zoom is but one take on this market, and a myriad of other contenders exist out there, like RingCentral, Vonage Holdings, LivePerson, and 8x8 to name just a few. That doesn't include the tech giants that have their own competing cloud offerings as well. From one angle, the decision to issue new stock to pluck Five9 out of this crowd could be viewed as acknowledgment from Zoom management that it thinks its stock is expensive. However, maximum flexibility is key in the fast-moving industry, and cash is the path to said flexibility. Though Zoom is flush with liquidity, with nearly $5 billion in cash and equivalents at the end of April, Five9 would have racked up quite a bit of debt if it had gone that route, limiting its future operating agility. By issuing stock instead, Zoom dilutes its current shareholder base by less than 15%. Its market cap is $105 billion as of this writing. One of the compelling reasons to invest in cloud computing stocks is their highly profitable nature and cash-rich balance sheets -- which keeps them nimble and able to quickly pivot in new directions in the future. I, for one, like Zoom's decision to issue stock instead of debt, keeping it away from the problem most traditional telecom operators are contending with: more indebtedness than cash. Zoom's move on Five9 is a big deal, and it's further proof that a new era of cloud-based communications is only just beginning to disrupt the traditional telecom industry. Widespread videoconferencing adoption has forever changed the business landscape, and Zoom is only deepening its lead in this arena by adding complementary services into the mix. The future looks incredibly bright for this tech disruptor.