Amazon (NASDAQ: AMZN) and MercadoLibre (NASDAQ: MELI) exist as similar businesses targeting different markets. While Amazon might have become the king of e-commerce in the developed world, MercadoLibre's approach has effectively made it the Amazon of Latin America.

The question now comes down to which company has better positioned itself for stockholders. Let's take a closer look to see which consumer discretionary stock will likely offer higher investor returns.

As most know, both Amazon and MercadoLibre emerged as e-commerce pioneers, working to make e-retailing a viable shopping option for many of the world's consumers.

Amazon brought these benefits first to North America and later to other countries. The company has also moved into the Latin American market. However, it has faced a key competitive disadvantage in this region. Most Latin American consumers use cash regularly, and a large percentage of them hold neither a bank account nor a credit card. This presents a challenge to e-retailers who rely on cashless payment.

MercadoLibre has addressed this through its payment system, Mercado Pago. On the Q1 2021 earnings call, CFO Pedro Arnt emphasized the company's role to "democratize money and access to financial services" within its ecosystem. To this end, Mercado Pago offers fintech options so consumers can pay for items on the site. Moreover, the company has since expanded Mercado Pago to help other companies facilitate cashless commerce. Not only does this give MercadoLibre a competitive advantage in its home region, but it also makes MercadoLibre a fintech company.

Still, investors should remember that Amazon also operates a nonretail business with its cloud infrastructure service, Amazon Web Services (AWS). AWS not only pioneered the cloud industry, but it also delivered much higher margins than retailing and, at least until recently, accounted for a majority of company profits. These profits have sometimes subsidized Amazon's retail arm. One example is the shift from two-day to one-day shipping in 2019, when Amazon sacrificed short-term profit growth to widen its competitive advantage.

How the financials compare

Amazon supports a market cap of more than $1.6 trillion, one exponentially larger than the $70 billion market cap for MercadoLibre. However, this means that MercadoLibre can achieve higher growth percentages than Amazon on lower volumes.

In the first quarter, MercadoLibre's revenue of $1.4 billion surged by 111% compared with year-ago levels. The company also logged a $34 million loss, more than the loss of $21 million in the same quarter last year. Still, investors should remember that while the company did lose money in the first quarter of last year, that did not prevent MercadoLibre from turning a profit in fiscal 2020.

In contrast, Amazon's $108.5 billion in net sales amounted to a 44% increase compared to the same quarter last year. Thanks largely to noncore income sources, net income surged 220% to $8.1 billion. That income led to a free cash flow of $26.4 billion over the last year, compared with about $691 million for MercadoLibre's previous four quarters.

Additionally, of the two companies, only Amazon published forward guidance, but neither would commit to a full-year outlook. Companies and analysts alike have expressed concerns that e-commerce growth will temporarily slow as countries emerge from the pandemic. However, with COVID-19 cases still on the rise in MercadoLibre's home region, that company faces more uncertainty on this front.

MercadoLibre's stock has also outperformed Amazon's over the last year. MercadoLibre increased by just under 65% over the previous 12 months versus Amazon's 33% increase during that period. Nonetheless, Amazon investors will pay less for growth. MercadoLibre sells for about 15 times sales, while Amazon's P/S ratio has fallen to about 4. 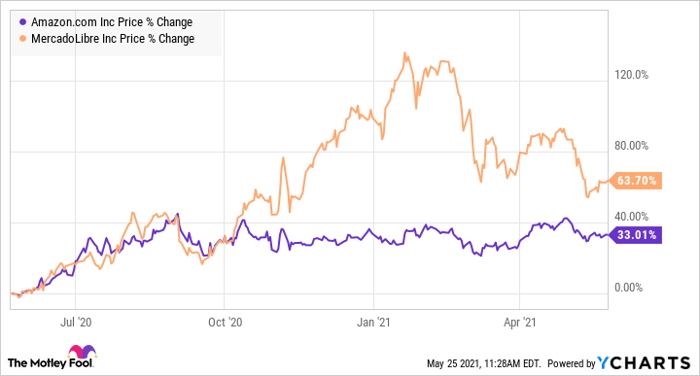 Despite the higher expense, I believe MercadoLibre holds an edge for the long-term investor. This decision comes down to size. Amazon has already realized much of its potential, while MercadoLibre remains in an earlier stage of its development, meaning it can more easily log faster revenue growth.

Admittedly, Amazon might remain the superior company, and MercadoLibre might never match Amazon's size. Also, given its current growth rates and strong cash flows, Amazon could remain a more suitable choice for risk-averse investors. Nonetheless, given MercadoLibre's much faster increases in revenue, those with a higher risk tolerance should benefit more from its stock in the long term.

Evergrande missed another milestone payment, what could it mean?

Fears are looming as the Evergrande crisis intensifies this week. The Chinese real estate developer is beginning to stretch its…

This Aussie fund manager values Tesla (NASDAQ:TSLA) share price at over US$3,000

The Tesla Inc (NASDAQ: TSLA) share price has long been one of the US shares that have gripped Aussie investors with…

When it comes to global shares, Tesla Inc (NASDAQ: TSLA) is hard to beat. The electric vehicle and battery maker,…

Another day, another revelation in the China Evergrande Group saga. The precariously perched Chinese property developer is believed to be…

Here’s why Square stock pulled back 10% in September