Shares of Alphabet (NASDAQ: GOOG) (NASDAQ: GOOGL) were climbing higher last month after the Google parent gained early in the month amid bullishness over the economic reopening and a rise in the broad market. The stock jumped again at the end of April after it delivered a better-than-expected first-quarter earnings report, and it got a number of bullish analyst notes and upgrades along the way.

According to data from S&P Global Market Intelligence, the stock finished the month up 14%. The chart below shows its gains. 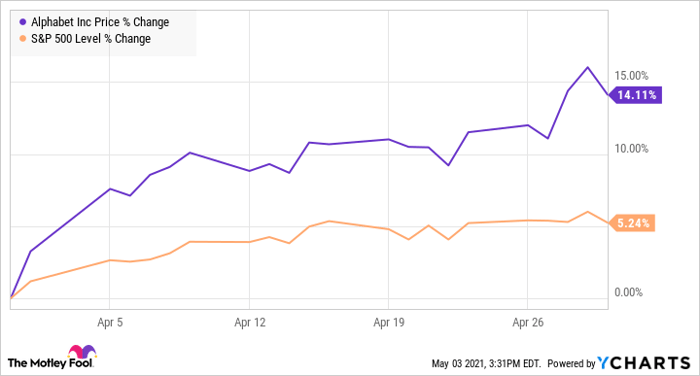 Alphabet shares jumped out to a strong start in April amid a broader bullishness in the market as President Joe Biden unveiled a $2.3 trillion infrastructure bill, and the March jobs report was better than expected, showing the economy added nearly 1 million jobs. Both items, along with an accelerating vaccine rollout, helped drive Alphabet shares higher since the company's performance, as an advertising business, is highly correlated with the overall health of the economy.

Several analysts raised their price targets on the stock over the course of the month, including Wedbush, which added the stock to its best ideas list, seeing its opportunity being accelerated in the reopening.

And the stock rose 3% on April 28 after the company beat estimates by a wide margin in its first-quarter earnings report. Revenue jumped 34% to $55.3 billion, lapping the beginning of the lockdowns a year ago and beating estimates at $51.7 billion. On the bottom line, operating income doubled, and the company finished with earnings per share of $26.29, which was well ahead of estimates at $15.82. Growth in its advertising business, especially YouTube, was strong, and cloud revenue jumped 46% to $4 billion.

Alphabet shares are now up 33% as the tech giant is well positioned to benefit from the economic reopening, which is already driving a surge in advertising demand. Additionally, shares of the Google parent offer great value, trading at a price-to-earnings ratio of just 27. Don't be surprised to see the tech stock continue to march higher this year.