Most of the time, the CEO has to answer for a company's cratering stock price. Investors clamor for accountability when things go bad, and typically a stock's decline is the direct result of a deteriorating business. Dropping share prices should usually be commensurate with aforementioned fundamental deterioration, if there is any. That's not always the case, though.

Most of the time, the CEO has to answer for a company’s cratering stock price. Investors clamor for accountability when things go bad, and typically a stock’s decline is the direct result of a deteriorating business. Dropping share prices should usually be commensurate with aforementioned fundamental deterioration, if there is any. That’s not always the case, though.

Marcial also said that some large investors “assert privately that it’s time for Apple to oust Cook, under whose tenure Apple’s stock has lost about half of its market value since October 2011, when he took over as CEO.” The latter part of statement is inaccurate on two levels: Shares are still up marginally from when he became CEO in August 2011 (this inaccuracy has since been acknowledged and removed by Forbes editorial). 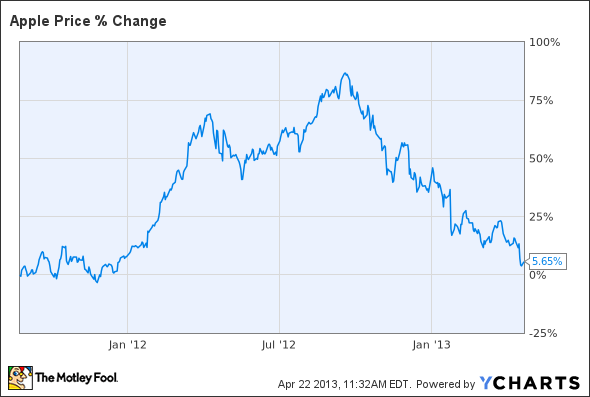 What’s entirely true is that shares have given up nearly all of the envious gains that they had previously enjoyed under Cook’s leadership. However, amid a gut-wrenching decline and the search for answers, investors are losing sight of how to really assess Cook’s performance as Apple’s CEO.

Cook has delivered numerous records for shareholders. Both holiday quarters that he has presided over set all-time highs for all of Apple’s most relevant performance metrics (other than share price).

In nearly every quarter, Cook has put up iPhone unit sales higher than anything Apple ever reported under Steve Jobs. iPad units under Cook have also soared to levels unseen under Jobs. Revenue and net income have similarly skyrocketed during Cook’s tenure, as a testament that he can indeed put up results where it counts. Last quarter was quite literally the strongest quarter Apple has ever posted in terms of revenue, net income, and unit volumes for the iPhone and iPad, even if it wasn’t enough for investors.

Scrooge McCook
Other critics have cited Cook’s seemingly hesitant attitude toward increasing Apple’s dividend as a reason he has to go. Apple’s cash hoard continues to swell and Cook continues to give little more than vague assurances that Apple is in “very active” talks about cash options.

It’s entirely true that Apple needs to give more back to improve its capital allocation policies, but remember that Cook is the only reason why investors are getting a dividend in the first place. It was very clear that Jobs was quite content with growing Apple’s cash position to infinity, and had no interest whatsoever in returning cash to shareholders.

In the grand scheme of things, Apple’s current dividend has been in place for less than a year, and most companies tend to stick to an annual dividend cycle. Apple’s being held to a different standard due to its declining share price and soaring cash position. Under other circumstances, investors would have more patience while they await the inevitable dividend boost announcement.

Cook thinks different
If investors were truly this disappointed with Cook, they wouldn’t have given him a 99.1% investor approval rating at Apple’s annual meeting in February. There have been no official developments in the past two months (even as the Apple rumor mill does its daily thing), so there’s no reason for investor approval to change much from then.

None of the above comparisons to Steve Jobs are intended to suggest Cook is better than Jobs overall as a CEO; Cook is just different. Rather, investors need to refocus on the company’s fundamentals over the share price when assessing CEO quality. In those aspects, Cook has performed admirably.

It’s not Cook’s fault that there’s been a distinct disconnect between Apple’s share price and Apple’s fundamentals, since its prices are entirely dominated by emotion in the current environment. There are some legitimate headwinds that Apple faces in its core businesses, but those challenges hardly warrant a nearly $300 billion loss in market cap.

Instead of blaming Cook for Apple’s fall, investors should blame their fellow investors for losing confidence in a company at the top of its game.

Not an Apple believer? There are plenty of other great investments for your portfolio. The Australian Financial Review says “good quality Australian shares that have a long history of paying dividends are a real alternative to a term deposit.” Get “3 Stocks for the Great Dividend Boom” in our special FREE report. Click here now to find out the names, stock symbols, and full research for our three favourite income ideas, all completely free!

A version of this article, written by Evan Niu, CFA, originally appeared on fool.com.