A musical war has been raging on in the clouds, with powerful heavyweights contending for dominance. Within the past few years, Google (Nasdaq: GOOG), Amazon.com (Nasdaq: AMZN), and Apple (Nasdaq: AAPL) have all unveiled their own respective music streaming offerings.

Key notes
Google Music and Amazon Cloud Player were analogous to cloud storage lockers, where users had to spend countless hours uploading their entire music collections, depending on the size of their song stashes.

Amazon shocked the record labels with its Cloud Player, and the labels weren’t all too happy that the e-tailer moved forward with its streaming service without their collective stamps of approval. Naturally, they wanted some licensing dollars sent their way, since they figured streaming needed a sign-off. Amazon disagreed, saying its offerings were fair game as they stood.

Google Music was launched later in the year and has since been integrated into Big G’s broader Google Play digital storefront. The search giant had a lot of catching up to do, as the digital-music market has long been dominated by iTunes and, to a lesser extent, Amazon’s MP3 store.

A common Apple theme: saving the best for last
When Apple isn’t the first mover in a market, it tends to take its time to make sure it’s the best.

Apple’s response was iTunes Match, with one of the primary selling points being the elimination of most upload times. By signing up for the US$25-per-year subscription, iTunes would scan a user’s music library, see whether Apple had a master copy on file, and then make that copy available for streaming and downloading.

There was a semantic argument that followed, as iOS devices technically stream while downloading locally, as opposed to pure streaming. Macs were able to stream entirely. iOS 6 is rumored to include pure streaming in iTunes Match. 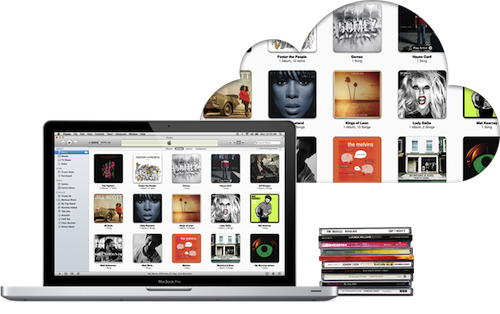 If a track wasn’t in Apple’s massive library, then it would need to be uploaded, but chances were pretty good that Apple had a copy lying around somewhere, since it pioneered digital music distribution nearly a decade ago.

Apple made sure to get the approval of its record-label partners ahead of time, unlike its e-tail rival.

A match made in heaven
According to a recent CNET report, Amazon is now looking to follow in Cupertino’s footsteps and is in the process of inking similar deals with labels that allow it to match songs in the same way, eliminating the time-consuming upload process. Amazon launched its MP3 store in 2007 and has built up quite a selection, so it also probablly has master copies of all your favorite tunes.

CNET says Amazon has reached agreements with three out of the four major record labels and could make an announcement within weeks for an upgraded service offering.

Better late than never
In the meantime, competition in music streaming also includes companies such as Pandora Media (NYSE: P) and its namesake music-discovery service. Spotify made a big splash by crossing the Atlantic and has wooed many a listener.

Steve Jobs was always sceptical of music-subscription services, noting that providers tend to jack up prices over time and users run into a tough spot down the road if prices get too high and face losing access to a music library they’ve become accustomed to. iTunes Match was a clever balance between the two.

The upload process is the biggest drawback to the storage-locker approach, and eliminating it is the right move. Amazon keeps focusing on content and media sales (36% of consolidated sales last quarter), and this would be a natural extension of that strategy, seamlessly making it available while eliminating manual legwork.

When it comes to getting official approval from the record labels, it’s better late than never.