There were plenty of headlines for Apple‘s (Nasdaq: AAPL) Worldwide Developers Conference, or WWDC, keynote. Behind the scenes, there were also a handful of lesser developments that didn’t warrant as much attention, and the Mac maker also probably didn’t want to distract from the main events.

R.I.P. 17-inch MacBook Pro
The 17-inch MacBook Pro is now officially dead, quietly discontinued while the 13-inch and 15-inch models saw upgrades in addition to the new thinner model featuring a Retina display. Analysts estimate that the 17-incher was making up only 1% of notebook sales, so it won’t be missed for the most part. Instead, Apple will focus its engineering efforts and dollars on the smaller models that drive the bulk of sales.

Long live the Mac Pro
Apple’s desktop Mac Pro was also aging. After not seeing an update since 2010 and feeding speculation that it was abandoning creative professionals, Apple went ahead and updated the towering desktop with Intel‘s Xeon E5 chips, packing 12-core processing power, but not much else. This machine didn’t get any physical redesigns and is just having its brain swapped out.

Widgets
The company also released a handful of various accessories, including a new AirPort Express Base Station, a new variant of its popular iPad Smart Cover, and a bunch of random little dongles. Many of these widgets leverage the Thunderbolt interface that Apple adopted last year.

China
Apple continues to focus heavily on China by including various local services integrated directly into its operating systems. We already knew that local services like SINA‘s (Nasdaq: SINA) Weibo microblogging service and video-sharing Youku (Nasdaq: YOKU) are featured in the upcoming Mountain Lion, but those services are getting additional integration into iOS, alongside the addition of Baidu (Nasdaq: BIDU) as a default search engine on Chinese iPhones. 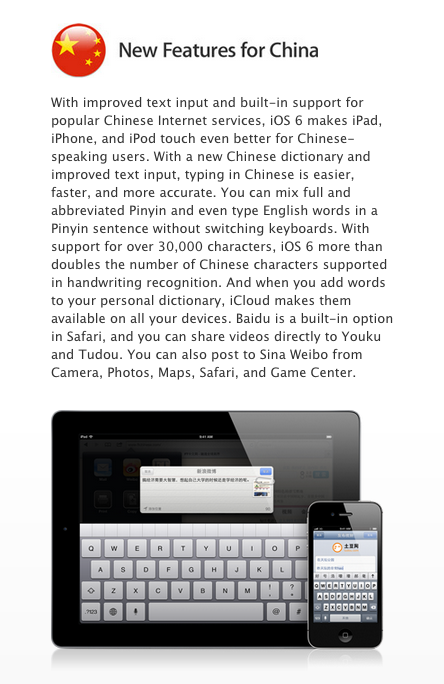 As Mac software chief Craig Federighi laid it out:

One area I want to highlight — features we’re adding for China. We’re improving our Chinese input method. Providing a new Chinese dictionary. In Safari, we’re adding support for Baidu. Those are a few new features … get your apps ready for China.

iOS head Scott Forstall echoes this same sentiment on the mobile front, expanding Siri’s capabilities within the region to include local business searches in China. Apple is also finally adding Mandarin and Cantonese recognition support for the virtual assistant.

It’s worth noting that this is quite a feat, considering how few distinct sounds are in the Chinese language. Chinese uses monosyllabic words where different accents determine the meaning, so the intonation is key. Backend recognition provider Nuance Communications (Nasdaq: NUAN) continues to improve its game in this department, but its Mandarin recognition was far from perfect just a few months ago.

For example, Businessweek’s Vanessa Wong recently threw a couple of Chinese tongue twisters, which are much trickier than English ones, at Nuance’s Dragon in Chinese, and the software had trouble interpreting the correct meaning. She used “Mother scolds the horse,” which translates into “mama ma ma” (accent marks omitted for formatting purposes).

Officially adding Chinese support for Siri means that Apple thinks it’s ready enough for prime time. I say “ready enough” because Siri itself has frequently been criticised for not being quite up to par.

No other international segment gets this level of love from Cupertino.

One step closer to iWallet
A lot of people have been scratching their heads on why Apple hasn’t jumped into the payment-processing business. Apple has 400 million accounts with credit cards stored on file that are just a click or a tap away for users to pay. Meanwhile, Google has Google Wallet, eBay‘s PayPal remains a big player, Square is taking the mobile payment world by storm, and wireless carriers are setting up their own ISIS payment network, among many other players.

Apple’s freshly unveiled Passbook app aggregates all of a user’s boarding passes, movie tickets, store gift cards, coupons, and more. What seems like a relatively minor feature that offers a tad bit of convenience actually takes the iPhone one step closer to becoming a wallet.

I see this as an indication that Apple is working toward eventually setting up a payment solution, a requisite function for any wallet. Cupertino’s just starting with the basics first. Apple frequently emphasises that when it’s not the first to market, it takes its time to be the best.

Apple TV: still closed off
Contrary to the rumours, Apple opted not to open up the Apple TV platform to third-party developers. Doing so would have let Apple get a jump-start on creating content for its inevitable TV, but the Apple TV’s installed base pales in comparison with iPhones and iPads, so it might not prove worthwhile for developers. Opening it up as a platform seems inevitable, but I guess Apple’s not quite ready yet.

The devil’s in the details
The real show stealers were the 15-inch MacBook Pro sporting a Retina display and details on the next major versions of both desktop and mobile operating systems. But the little stuff still always matters.