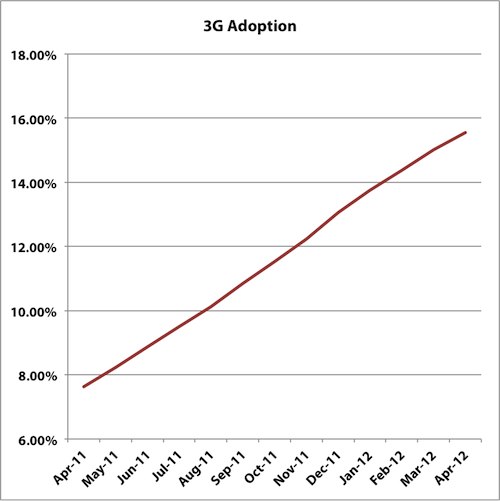 China Mobile’s lagging penetration is partially attributed to its unique 3G network standard that doesn’t play nicely with some smartphones, which would require OEMs to make specialised versions for its proprietary network. Fortunately, this new iPhone-bound Qualcomm chip will handle any standard you throw at it, including the new TD-LTE network that China Mobile is building.

Is Apple limited?
Credit Suisse analyst Colin McCallum is providing some additional details on the rise of 3G in China. The firm is boosting its rating on China Telecom by two notches, from “underperform” to “outperform,” while China Mobile and China Unicom already carried “outperform” ratings.

Much of this bullishness is predicated on the 3G adoption and inherent revenue upside that it entails, as average revenue per user, or ARPU, will continue to trend higher along with 3G adoption while requiring less in capital expenditures since these networks are already in place. He pegs increased data usage as another catalyst for revenue growth.

McCallum also notes that the falling prices of smartphones, led by Google (Nasdaq: GOOG) Android offerings, is helping to spur customers to snap up devices. Many of these low-end Android devices are available under the important price threshold of 1,000 yuan, which translates into about $158. Meanwhile, Apple‘s (Nasdaq: AAPL) newest iPhone 4S starts at 4,988 yuan for a 16 GB model, or about $789.

The analyst thinks that price point “clearly limits the size of Apple’s current addressable market in China, given GDP per capita of US $5,208.” That’s certainly true, but there are also a couple mitigating factors to point out.

Pick your iPhone
China Telecom launched the newest iPhone 4S free on contract earlier this year, helping spread out the upfront cost. The carrier also recently launched a promotion geared toward enterprise customers of buying 10 iPhones and getting one free. Similar to its domestic pricing strategy, Apple also has lower price points for older models to target.

Right now, Apple offers contract-free prices for the iPhone 3GS / 4 / 4S of 2,888 yuan (US$457) / 3,688 yuan (US$583) / 4,988 yuan (US$789). Once the sixth-generation model is released this year, there’s a good chance Apple will continue producing the iPhone 3GS and lower its price, a trend that will continue over time. In this way, at least Apple will have a broad spectrum of iPhone models available at different price points, letting Chinese consumers choose for themselves.

I prefer profit share any day
Even if Apple’s market share technically lags Microsoft and Google, its iPhone unit sales in Greater China soared fivefold last quarter. That should boost Cupertino’s profit share nicely, which I’d rather have as a shareholder anyway.