Superficially, there are some similarities between Facebook (Nasdaq: FB) and Google (Nasdaq: GOOG). There’s no doubt that last Friday’s extravaganza was the most highly anticipated IPO since the search company sold shares to the public in August 2004. Perhaps investors now buying Facebook shares expect to reap the same returns that early investors in Google did. If they do, they’re using the wrong blueprint — there are fundamental differences between the two companies (and the two stocks) that mean Facebook investors will never achieve comparable success. Here are just three of those reasons.

Facebook’s growth is appreciably slower than Google’s was
The following bar chart shows the annual revenues of Facebook (red) and Google (blue) side by side. I’ve chosen different start years — 2000 for Google and 2007 for Facebook — to match them up at comparable periods in their development. The vertical axis is on a logarithmic scale, and the unit is billions of dollars. 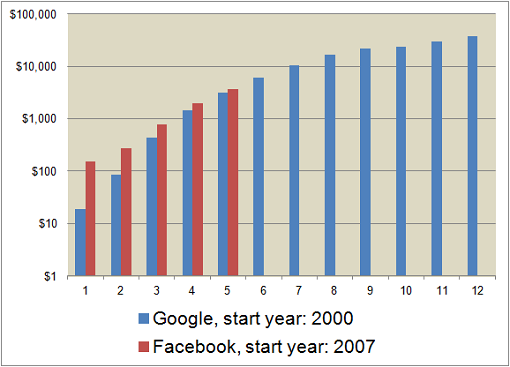 Clearly, Google was growing much faster than Facebook when it achieved similar revenues in Year 5. The trend suggests that in Year 5 (representing 2011 for Facebook and 2004 for Google), Google is just about to overtake Facebook. Sure enough, during the following quarter, Google’s revenues were US$1.35 billion (Q1 2005), substantially more than Facebook’s US$1.06 billion (Q1 2012).

Facebook shares are more expensive than Google’s were
Back in 2005, on the day Google announced its first-quarter results, the shares closed at a price-to-earnings (P/E) ratio of 80.7 on the basis of trailing-12-month earnings. Interestingly, if Facebook shares were now trading at the bottom of the IPO pricing range (US$34), their P/E ratio would be almost identical, at 79.1.

On that assumption, then, the two companies would sport similar valuations at a similar point in their growth path. Here’s a rough conclusion I draw from that observation: Assuming Facebook were a US$34 share, your absolute best-case “shoot-the-lights-out” scenario would be to earn the same return over the next seven years that Google was able to produce over the past seven years — a tripling of the stock price.

That might sound great, but let me be clear: First, a US$34 buy-in price is not on the table right now. Based on current prices, the scenarios that are most likely range from pedestrian returns to a catastrophic destruction of wealth (something on the order of a 40% to 80% loss over the next five to seven years.) With all due respect to my Foolish colleague Rick Munarriz, there is no chance that Facebook is actually cheap. None. Second, reproducing Google’s operating results is closer to a pipe dream than a best-case scenario: Facebook can only dream of being Google when it grows up.

Facebook dominates a trend, not an industry
Think about it. Google created a business that it continues to dominate to this day: paid search. Facebook, meanwhile, is arguably the dominant social-networking website (although Twitter might have something to say about that). Sure, social networking is not a fad — people who say it is aren’t paying attention — but neither is it a business model.

Saying that Facebook will be a great investment because it is the dominant participant in a huge technological trend is fundamentally the same argument that was made in 1998, according to which Web-based businesses will succeed because the Internet is having a profound impact on businesses and consumers. For every Amazon.com, there are many, many Pets.com, Boo.com, or Ariba examples, and even Amazon didn’t prove to be a great investment at any price.

Today’s reality for Facebook is a business model that is no different from displaying banner ads. Is there potential value in 900-plus-million users? Of course, but right now it is nothing more than that — potential. Facebook’s efforts to monetise its user base in ways that create genuine, significant value for companies is untested, particularly as users migrate to Facebook’s mobile application. Even Facebook executives admit that.

However, that (highly uncertain) potential embedded is now changing hands at certainty-level prices. Let me state this unambiguously: The vast majority of Facebook’s market value can only be attributed to highly uncertain potential profits that have a high probability of failing to materialise, if not altogether at least not on the scale that is embedded in the current price.

It’s a slam dunk … to avoid this stock
In Facebook, we have a business that is much less predictable than Google’s and is growing more slowly than Google was at the same stage and with its largest growth opportunities untested — yet the shares are priced more expensively than Google’s were. Google made good on its early potential, and it rewarded investors in the process. For Facebook, a track record of flawless execution is something it will need to establish — once it has figured out what business it is in — if it can even come close to justifying today’s share price. At what price is Facebook a good bet? A prudent speculator would require a wide discount to even the bottom of the IPO’s pricing range.

A version of this article, written by Alex Dumortier, originally appeared on fool.com