Meta Platforms (NASDAQ: FB) stock went up more than 17% on Thursday, then Amazon (NASDAQ: AMZN) stock was down over 12% in after-hours trading. When such large companies make mega moves to the upside and downside, it can be a sign that the market is volatile. And given the NASDAQ Composite Index (NASDAQ: .IXIC) has plunged into a bear market in a matter of months, it is clear that the 2022 stock market is looking much different than the rip-roaring year we had in 2021. A bear market is defined as a drawdown of at least 20% from an all-time high, while a correction, which the S&P 500 Index (SP: .INX) is currently in, is a drawdown of at least 10% from an all-time high. However, bear markets are not inherently bad things. And with the right temperament and patience, they can even lead to life-changing wealth. Here are three timeless investing lessons from the 2022 Nasdaq bear market that you can take with you to become a better investor.

1. It's a staircase up and an elevator down

There's an old saying that the stock market is a staircase up and an elevator down. We are seeing this pattern play out before our very eyes. Bull markets are typically slow and steady and last for multiple years, while bear marks are sharp and swift and tend to last for just one or a few years. At least that's what history tells us. And that's certainly what has played out since the financial crisis. There has been a more or less uninterrupted 12-year bull market since the financial crisis. But included in that bull market have been a handful of bear markets -- such as the fall 2018 bear market, the spring 2020 bear market, and the bear market we are currently in. Yet through it all, the S&P 500 has still produced a 375% return (without factoring in dividends) since 1 January 2009, while the NASDAQ Composite has produced a more than 700% return (without factoring in dividends). 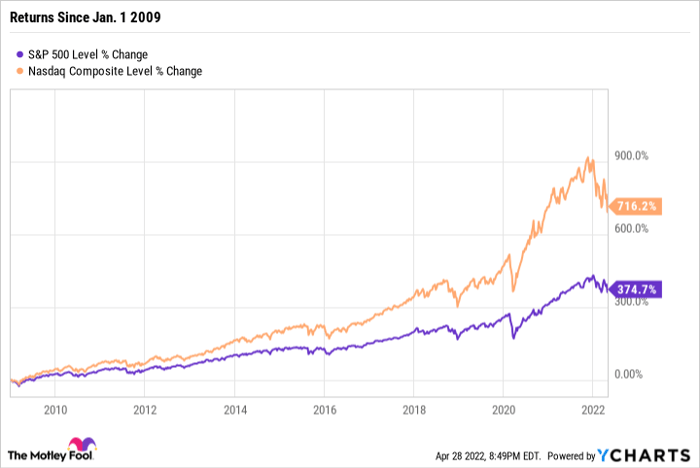 The median annual gain of the S&P 500 between 1950 and 2021 was 12.36%. But the standard deviation for that period was 16.04 percentage points. That means that roughly one out of every three years produces an annual return of worse than -5.91% or greater than 26.17%. It's also worth mentioning that there have been 18 down years and 53 up years since 1950. But the average return during a down year is -11.4%. However, that data is somewhat misleading given the unlikelihood that bear markets correlate with calendar years. For example, in 2018 the S&P 500 was up close to 10% year-to-date (YTD) in early October 2018, fell to -12% YTD by Christmas Eve (a 22-percentage-point swing in less than three months), but then finished the year down just 6%.

Probably one of the most contentious debates in investing is on valuation. On one end of the spectrum, you have investors like Warren Buffett, who preach value investing and only pay reasonable amounts for businesses based on their earnings, free cash flow, etc. Then on the other end, you have investors like Cathie Wood, who argue that innovative companies that change the paradigms of their industries have so much upside that valuation should be an afterthought. The 2022 bear market has taught us that while companies may have tons of potential, there is a great deal of uncertainty as to whether they can live up to lofty expectations. Uncertainty can come in the form of unreliable management, as we have seen through the spectacular collapse of Teladoc Health stock, which is down over 90% from its all-time high. It can also come in the form of increased competition, which we have seen in the fintech space as legacy financial services companies open their pocketbooks on investments, which has strained the edge that companies like Robinhood, SoFi, and Upstart were thought to have in spades. The best approach for most investors is to find a middle ground between value and growth by using as many known variables as possible and avoiding unknown ones. In this vein, that probably means sticking mostly with established companies with positive free cash flow and growth potential. These are the types of companies you'll want in your corner if the market crashes.

3. Invest in companies that you understand and that suit your personal risk tolerance

The biggest mistake an investor can make isn't selling too soon or buying something too high. It's investing in companies that you don't understand and that don't suit your personal risk tolerance. Because if you do that, then you won't know why a stock can go up 400% in a year and then fall 90% the next. Or why a stodgy dividend stock can barely move while the market soars and then barely fall when the market tanks. Aligning your personal risk preferences with companies you understand and believe in is the best way to avoid the psychological torment that can come when a bear market is straining good and bad companies alike, and you don't know how to react. By sticking with a process, you stand the best chance to endure market volatility and let the power of compound interest work in your favour over the long term.

Many investors who are new to the stock market have never endured a multi-year bear market. The bear market of late 2018 only lasted a matter of months. Same with the 2020 bear market. In fact, there has not been a bear market that has lasted for more than a year since 2008. By taking a long-term perspective while also using the bear market as a learning experience, you can use this period of stock market volatility to sharpen your skills and become a better investor. If done correctly, this approach could pay lifelong dividends that far exceed any pain your portfolio is currently suffering.