Generally speaking, growing companies tend to avoid dividends, opting instead to funnel any excess cash back into the business. However, that doesn't mean it's impossible to find dividend-paying growth stocks. For instance, Warren Buffett's Berkshire Hathaway owns stock in Apple (NASDAQ: AAPL) and Mastercard (NYSE: MA), and both companies pay quarterly dividends while still having solid prospects for future growth. Here's what investors should know.

Apple has built a consumer electronics empire. From Macs and iPhones to the Apple Watch and AirPods, the company's hardware rarely fails to captivate its customers. In fact, Apple had a worldwide installed base of over 1.65 billion devices as of its fiscal 2021 first quarter, and that number is likely to climb with the recent launch of its M1-powered iMac and iPad Pro. So what's driving that popularity? One of Apple's greatest advantages is iOS, the operating system that powers its mobile devices. Unlike Android, iOS is closed-source, meaning no third party can install it on their own hardware to create a cheaper "Apple-like" experience. In other words, if you want the Apple experience, you have to pay for it. That advantage allows Apple to charge a premium for its products. For instance, the average iPhone sold for $873 in the fourth quarter of 2020. By comparison, the average Android smartphone sold for $250 last year. That pricing power has been a tailwind for Apple's business. Not surprisingly, the company has delivered solid financial results over the long term. 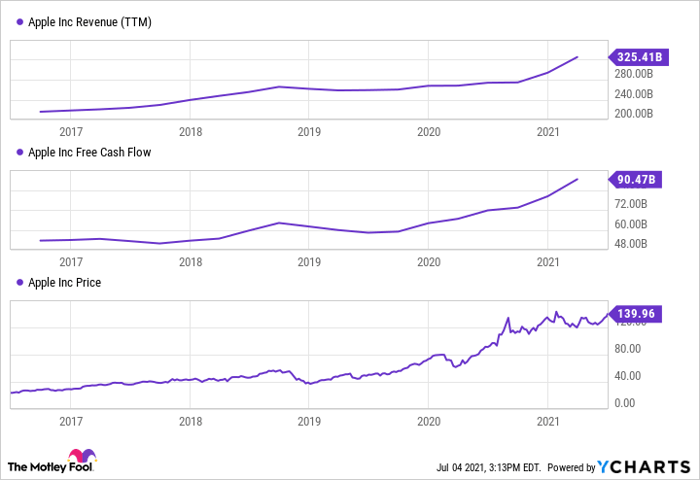 Since 2016, Apple's share price has surged over 375%, but shareholders have also benefited from regular dividend payments. Currently, the quarterly payout sits at $0.22 per share, but that figure has gone up every year since 2012. And with Apple's strong balance sheet, investors should expect that trend to continue. Moreover, I think Apple stock is poised to beat the market in the coming years. Its high-margin services business is gaining momentum, and the company reportedly has at least two augmented reality (AR) products in the pipeline, including a pair of AR glasses. Given Apple's past success with such hardware, I wouldn't be surprised if both of these products were big winners. The company is also developing an autonomous electric vehicle (EV): the so-called Apple Car. In fact, a recent article from Reuters suggests that this AI-powered EV may launch as soon as 2024. As a final thought, Apple is Warren Buffett's largest holding, representing 40% of Berkshire's portfolio. If the Oracle feels comfortable owning that much Apple stock, I think any investor should consider adding a few shares to their portfolio.

Mastercard's platform connects consumers, merchants, and financial institutions, facilitating electronic payments in over 210 countries and territories. In 2020, the company handled 24% of all card-powered purchase transactions, making Mastercard the third largest payments network in the world. For decades, credit and debit cards have been at the core of Mastercard's business. And despite widespread adoption, this market is still far from saturated. In fact, management believes cash and check transactions account for $68 trillion in global spend each year. For context, card-based transactions account for just $30 trillion. However, Mastercard has an even bigger opportunity. Management believes account-based transactions total $139 trillion each year. And rather than rest on its laurels, Mastercard has introduced several new products in an effort to take market share in that category. For instance, Mastercard Track targets commercial use cases, simplifying and automating account-based payments between buyers and suppliers. Similarly, Mastercard Send supports account-based P2P payments and disbursements (e.g. government-to-consumer payments). Last year, the pandemic created significant headwinds for Mastercard. Even so, the company has managed to grow at a modest pace in recent years.

Since 2015, Mastercard stock has more than tripled, surging 285%. At the same time, its dividend payments have increased like clockwork every four quarters, even during the pandemic. That underscores the company's financial stability, and it gives me confidence that Mastercard can weather just about anything. Currently, the quarterly dividend sits at $0.44 per share, representing a payout ratio of just 31%. In other words, investors have good reason to believe those annual dividend increases will continue. Moreover, given its massive market opportunity and strong competitive position, Mastercard could be a market-beating investment long term. That's why you should consider adding this stock to your portfolio.