Microsoft (NASDAQ: MSFT) recently unveiled what it's pitching as its "biggest exclusive games lineup ever" for Xbox. The lineup features 30 exclusive titles as Microsoft tries to bolster its first-party game library to attract more subscribers to its a la carte gaming service, Xbox Game Pass.

It's a long overdue move for the software giant, which has operated in the shadow of Sony's (NYSE: SONY) PlayStation dominance over the last few decades. In the previous generation, PlayStation 4 outsold Xbox One by more than two to one, according to data from VGChartz.

Microsoft has spent the last few years acquiring studios to match Sony's in-house studio count to crank out more first-party titles. While it's uncertain whether these moves will lead to the Xbox Series X/S outselling the PlayStation 5, Microsoft might be on to something given the tremendous lead Xbox Game Pass has over Sony's PlayStation Now subscription service.

Getting value out of recent acquisitions

It was expected that Microsoft would expand its game roster after scooping up ZeniMax Media, which operates one of the top game studios in the industry -- Bethesda Softworks -- for $7.5 billion last year.

Microsoft is packing a punch with its exclusive games. Besides the usual suspects like the new Halo Infinite and Forza Horizon 5, which have long been Xbox staples, Microsoft announced a few that will surely create buzz over the next year.

There is Redfall, a new multiplayer open-world first-person shooter from the makers of well-regarded titles Prey and Dishonored. Another standout on the list is an upcoming role-playing game called Starfield, coming in late 2022. Both of these upcoming games are from the teams at Bethesda.

Bethesda is the studio behind two blockbuster franchises, The Elder Scrolls and Fallout. The addition of this studio to Xbox Game Studios will no doubt pull a lot of weight for the Game Pass subscription service.

Microsoft's gaming business reported a revenue increase of 50% year over year in the fiscal third quarter and made up 9.6% of Microsoft's total business through the nine-month period ending in March.

In the console war, Microsoft is facing an uphill battle. PlayStation continues to rank high on brand value with consumers. The 2021 Prophet Brand relevance index shows PlayStation ranking up there with the likes of Apple and Amazon.

Early sales estimates show the PlayStation 5 outselling the Xbox Series X/S by a wide margin. Through the end of 2020, research from Ampere Analysis had PlayStation 5 selling 4.2 million units, compared to 2.8 million for Xbox Series X/S. Microsoft doesn't disclose specific unit sales, but in May Sony said it had sold 7.8 million PS5 units.

Keep in mind, both consoles have been consistently sold out due to supply chain issues, so it's possible that Microsoft is suffering more from component shortages than Sony is right now.

Nonetheless, investors are high on Sony's growth prospects, with the stock up 32% over the last year. Gaming contributes 35% of Sony's operating profit, and is much more valuable to the Japanese company than Xbox is to Microsoft. Sony reported a 43% increase in operating profit from its game and network services segment in fiscal 2020. 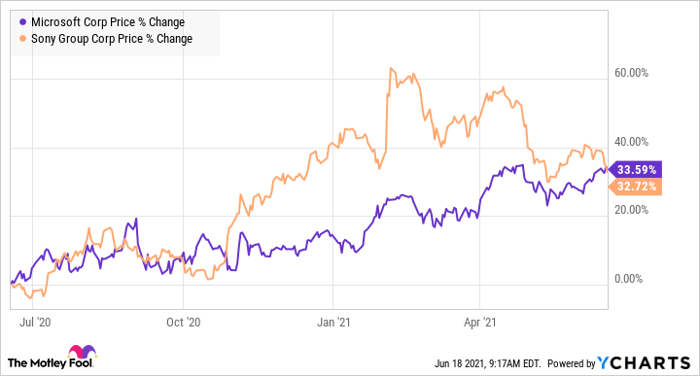 The thing is, Microsoft doesn't appear to be measuring its Xbox success on console unit sales. CEO Satya Nadella is applying the same playbook to the Xbox business as he did to the rest of Microsoft's business in recent years. The Xbox is turning into a ubiquitous platform, where players can access games on different devices without owning a console. While Sony continues to highlight its total sold units of the PS5, Microsoft is touting its subscriber growth.

Sony's PlayStation Now, which lets users play a selection of titles on console and PC for $10 per month, had 3.2 million subscribers at the end of fiscal 2020. That's up from 1.8 million in fiscal 2019.

Sony may continue to dominate hardware sales, but Microsoft's stellar lineup of 30 titles, 27 of which are going to Game Pass, could keep the software king far ahead in subscribers.

The long-term opportunity in gaming looks bright for both companies, with 3 billion people expected to play video games by 2023, representing a mid-single-digit increase per year. But it's a much easier path to convince a prospective gamer to try an affordable subscription service than drop hundreds of dollars on new hardware, so Microsoft might have the upper hand.

Sony is a force to reckon with in gaming, and it has plenty of exclusive titles that will draw a big crowd to the PlayStation. But Microsoft may do more to expand the audience for gaming in this console cycle than its rival.