The S&P/ASX 200 is down another 0.8% today, BHP Billiton (ASX: BHP) dragging the index down after releasing lacklustre quarterly production numbers.

According to the Australian Financial Review, the company has missedproduction forecasts in iron ore AND copper AND petroleum.

I know this will make Motley Fool General Manager Bruce Jackson sit up and take notice!

Last year, Bruce had been looking to pick up some more BHP shares at $30 or below. But in December, he finally admitted that was a little too greedy, officially abandoning his $30 buy price target on the Big Australian.

Even after today’s 1.7% fall, BHP is still trading around $37, a price that will likely see Bruce continuing to look elsewhere for his investing kicks.

If he’s anything like me, he’ll be scouring the market looking for stocks with ‘multi-bag’ potential — the types that can potentially make fortunes for us all.

Below I’ll tell you about the recent IPO I think may have such potential.

It’s a small-cap company, and as such is a higher risk stock, but it does pay a juicy dividend, and if all goes well, could be my next multibagger…

Stocks like nickel explorer Sirius Resources (ASX: SIR), which has returned 4,170% in just the last 18 months. 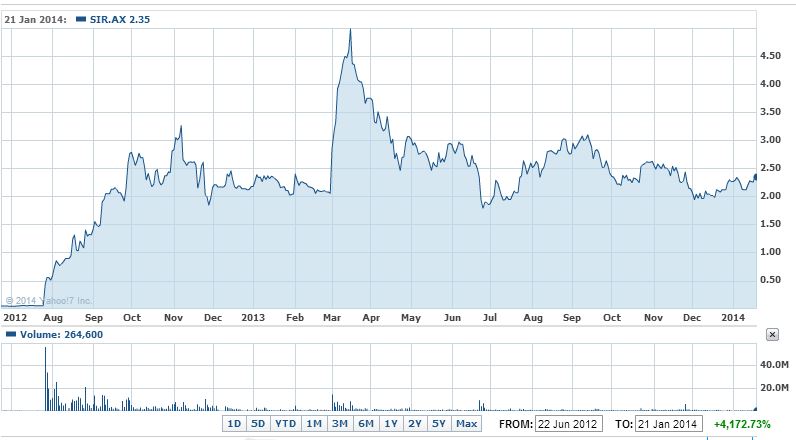 Stumbling onto one of these stocks is like winning the lottery. Alone, they can make up for non-performing stocks and mask a multitude of investing sins.

They can make you rich and set you up for a very comfortable retirement. And isn’t that what we’re all hoping for?

There is one sector that could contain the next Sirius, the next dramatic multibagger.

The number of people aged between 65 and 84 is expected to more than double by 2050, while those over the age of 85 will increase six-fold.

The good news for investors is that people will generally pay up for healthcare, no matter what is going in the economy or the stock market.

Some investors have already cottoned onto the gains that can be made in the sector.

ASX-listed biotech stocks gained an average 54% last year, according toresearch by BioScience Managers. The S&P/ASX 200 Health Care Index was up 23.5% for the 2013 calendar year — and a total 80% over the past two years.

You may already know some of the bigger names on the ASX, like CSL Limited(ASX: CSL), Primary Health Care (ASX: PRY), Sonic Healthcare (ASX: SHL) and Resmed (ASX: RMD). And perhaps you remember us mentioning our Motley Fool Share Advisorrecommendation Sirtex Medical (ASX: SRX), up 124.8% since we first recommended it to our paying members in April 2012.

But — with investment bank analysts, fund managers and hedge funds crawling all over them — many of these well known healthcare stocks are now trading at premium valuations. So getting these stocks to multi-bag from here will be difficult.

The good news is, there are still plenty of fish to shoot in the healthcare barrel.

They include the 11 biotech stocks that climbed 200% or more in 2013, according to BioScience Managers, including…

Other healthcare stocks also have had an outstanding year including Anteo Diagnostics (ASX: ADO) up 210% and one stock I own, Capitol Health (ASX: CAJ) up 189%.

Whether these stocks can double or triple or more from here, only time will tell.

You probably aren’t familiar with most of those names. Many are micro caps with market caps of less than $100 million, and feature less than prominently in the daily business newspapers.

I should also point out that some of these stocks are NOT for widows and orphans. They can be high risk, and share prices can drop as quickly as the rise.

Many small biotech stocks have similar traits to mineral explorers. Revenues for new drugs may only start flowing 10 or 15 years after initial research has begun. It’s a similar timeframe for small resources companies as they wait until they see revenues after they’ve discovered a commercially viable mineral deposit.

Out of every 10 biotechs, nine might turn out to be duds – such as Pharmaxis(ASX: PXS), which dropped 90% in the past year. Whether it can recover is yet to be seen.

Still, I own plenty of Healthcare stocks and they make up 23% of my SMSF equity holdings. 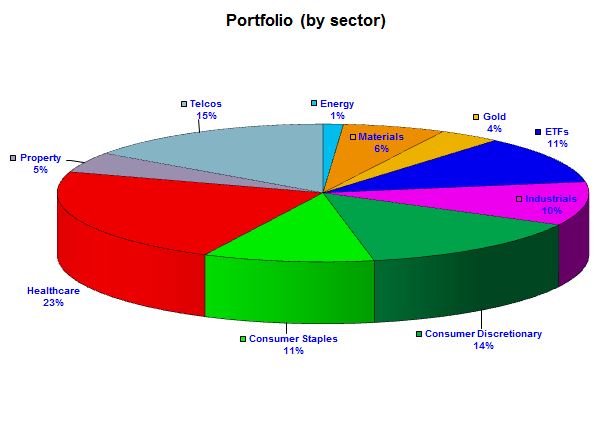 And that’s where my recent purchase of an IPO healthcare stock comes in.

As I wrote in this article for Fairfax Media, LifeHealthcare (ASX: LHC), a distributor of medical devices in Australia and New Zealand, listed on the ASX in early December 2013 at an attractive price-earnings ratio of 11.7 times, and is expected to pay a fully franked dividend yield of 6.9%.

That’s better than term deposits and the yield available from all of the big four banks.

LifeHealthcare is forecasting strong growth too, and has a history of growing its earnings by over 20% each year, despite average annual revenue growth of 6%. What’s more, shares are now trading at just $2.12, not substantially higher than its listing price of $2.

The market is ignoring this stock, daily trading volumes are low, and it’s flying under the radar of most investors  – but I’ve bought shares and figure it could be one of the most promising healthcare stocks in my portfolio.