There are several ways to consider if a stock is expensive. However, you may be surprised to find that they do not include the selling price. That's because even though Amazon's (NASDAQ: AMZN) stock is selling for over $3,000, what truly matters is where it trades relative to the company's results, such as earnings or revenue.

What's more, from a practical standpoint, most brokerages will allow you to buy fractional shares of a company. For instance, if you only had $300 to invest in Amazon, you can buy 0.10 shares (at a $3,000 stock price). That said, let's look at Amazon's business and then determine if the stock is expensive using financial ratios.

Over the past decade, Amazon has grown to a massive size. Sales in its fiscal 2020 year surpassed $386 billion. That was 37.6% higher than the previous year. The coronavirus pandemic caused hundreds of millions of people to avoid shopping in person for fear of contracting the potentially deadly virus.

Amazon was one of the prime beneficiaries of that change in consumer behavior. The company did an excellent job in delivering items that folks needed during the pandemic with only a few hiccups. That will certainly help keep those newly acquired customers with Amazon even in the aftermath of the pandemic.

The surge in customer spending also had a more immediate impact. In the 12 months ended Sept. 30, Amazon generated $55 billion in cash from operations and another $55 billion during the same period last year. That massive inflow of capital has allowed Amazon to invest in the business's infrastructure. Indeed, during that same two-year period, the company has spent over $87 billion on property and equipment, such as data centers, warehouses, and delivery vans.

These investments could make Amazon an even more customer-friendly shopping destination --  allowing it to reduce shipping times, add more items to its "Prime Delivery" option, and lower prices for customers.

For Amazon, attracting new shoppers and increasing the frequency at which existing shoppers buy can fuel further increases in another lucrative business segment: advertising. In its most recent quarter, the segment that houses Amazon's advertising revenue reported a rise of 49% to $8.1 billion. And for the most recent four quarters, Amazon earned nearly $31 billion in advertising revenue.

Amazon's business is heading in the right direction, but are its excellent prospects already priced into the stock, making it expensive for investors? 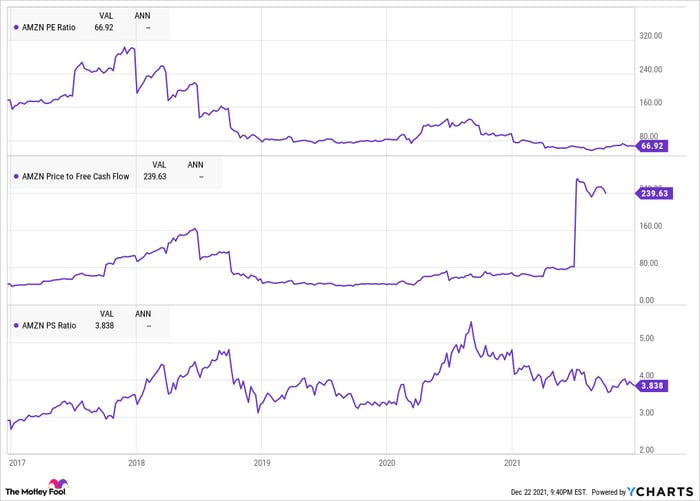 According to Amazon's price-to-earnings and price-to-sales ratios, it is not expensive; in fact, it is relatively inexpensive. However, when looking at Amazon's price-to-free cash flow ratio, the stock does look expensive (see chart above). Considering that Amazon nearly doubled its investment in property and equipment from $30.6 billion to $56.9 billion, the cash flow figure may be less informative.

So, overall: No, Amazon stock is not expensive.