Netflix (NASDAQ: NFLX) is losing market share to be sure -- but consider the circumstances. It was the first company to make streaming video a mainstream phenomenon, and for years, it was the only serious name in the business. It's only natural that the recent launches of big rival services such as Disney's (NYSE: DIS) Disney+ and AT&T's (NYSE: T) HBO Max would chip away at Netflix's share of the on-demand video space.

But there's room for more than one winner in this business, and Netflix's market-leading 204 million paid worldwide subscribers is still only a fraction of its total addressable market. Shareholders need not ramp up the anxiety levels just yet.

Stock-picking can be a funny business. Sometimes investors may use all the wrong reasons to mentally justify why a company deserves to be priced at a steep premium, but then quickly change their minds with little to no warning when circumstances shift.

It's this phenomenon that should make the streaming market's new entrants so concerning to Netflix shareholders. We've never actually seen Netflix forced to compete seriously until now. To the extent that its commanding market share and impressive growth rates are the reasons the stock's price-to-earnings ratio has lingered above 60, current investors should at least be cautious.

Continued dominance of a market is never guaranteed. Just ask investors of Yahoo!, MySpace, or IBM. There was a time when shares of IBM and Yahoo! were priced as if those companies would never stop growing, while privately held MySpace fetched a price of $580 million when News Corp. acquired it back in 2005 -- and was in 2007 valued at around $12 billion. Six years after News Corp. bought it, MySpace was sold again -- for $35 million. Competitors stepped up to the plate, as they always do.

Netflix is no MySpace, to be clear, but it wouldn't be a stretch to suggest that its best days are behind it. As tough as things have been competitively speaking over the course of the past year, they're only going to get tougher as players like HBO Max, Disney+, and Hulu step up their streaming games.

Data from market intelligence outfit eMarketer lets us flesh out this trend with some numbers. It reports that Netflix secured 36.2% of the U.S. over-the-top television industry's revenue in 2020, down from 44.4% in 2019. By 2022, its share is expected to be down to 28.4%, and almost even with Disney's slice of the U.S. streaming market.

That math is roughly in line with similar research from Ampere Analysis suggesting Netflix lost 30% of its U.S. market share last year.

Its next customers won't come cheap

In its defense, Netflix is winning a relatively smaller piece of a rapidly growing pie. Last year's revenue of $25 billion was up 24% year over year, propelled by subscriber growth at a similar rate, and its profits grew at nearly twice that pace. While year-over-year revenue gains are projected to slow, earnings growth is forecast to remain robust through 2025. This may be why Netflix shares continue to trade at 91 times trailing earnings and 57 times forward earnings.

That's a profit outlook, however, seemingly based on the assumption that per-subscriber marketing costs will remain suppressed. They won't. They can't.

See, players like AT&T and Disney are increasingly supporting their fledgling streaming platforms and gaining traction with their efforts. Whereas eMarketer forecasts that Disney and Netflix will be equals within the U.S. by 2022, Digital TV Research's principal analyst Simon Murray predicts Disney+ will dethrone Netflix as the nation's streaming leader sometime between 2024 and 2026. Disney itself says it's expecting to have between 230 million and 260 million Disney+ subscribers by 2024, versus Netflix's current headcount of 204 million. Netflix will be forced to respond, likely starting with more -- not less -- spending on marketing, or content, or both. 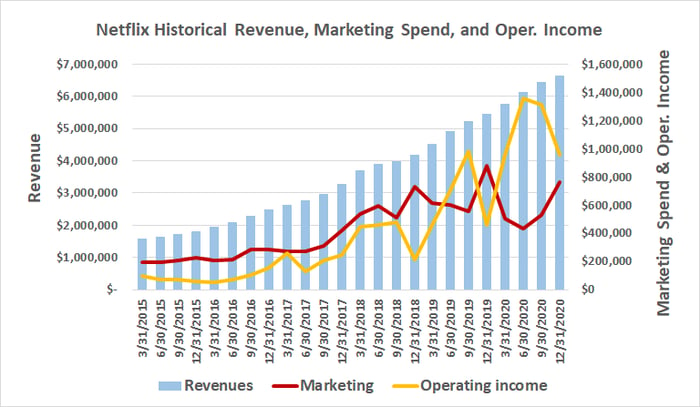 Data source: Netflix. All dollar figures are in thousands. Chart by author.

The message? The streaming market's cheap, the low-hanging fruit has been picked.

It's clear that Netflix's status as the bully on the block is in jeopardy. To what degree that matters remains to be seen. Just know that not much takes the wind out of a stock's sails like seeing the underlying company lapped by a newcomer, or seeing its market share chipped away by a flock of new competitors. Just ask IBM, which was once the dominant name of the business computing industry, but was ultimately upended by a combination of Intel, HP, and the army of motherboard manufacturers they led away from IBM's ecosystem. 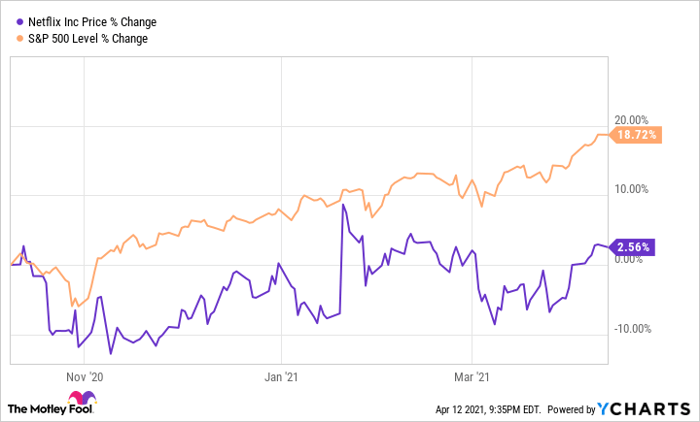 Given all of this, it's curious that Netflix shares have considerably underperformed the broad market over the course of the past six months -- a period when the appeal of a host of new streaming competitors became clear. It may be a subtle, subconscious hint of the market's brewing doubts about Netflix stock's steep valuation. Perception isn't everything, but it's certainly a lot.