GameStop's (NYSE: GME) stock price recovery from single-digit levels began with a short squeeze inspired by Reddit's WallStreetBets blog site. Outsized enthusiasm for the stock has offered a needed lifeline to GameStop, enabling it to raise capital and revive its ailing retailing business.

While this move increases the odds of GameStop's survival, its business model and financials indicate limited further upside. That strongly suggests the stock is overpriced. Here's why.

The retailer previously built a competitive advantage as a one-stop-shop for all things gaming, especially electronic gaming. Customers could visit GameStop to find the latest video games, get refurbished hardware, and buy, sell, or trade games. However, the rise of downloadable video game sales slowly made GameStop an unnecessary middleman as gamers could buy games and upgrades more easily directly from manufacturers.

Nonetheless, some good news for GameStop has resulted. GameStop has used its capital to transform itself primarily into a "digital-first, omnichannel retailer."

Also, it has replaced much of its previous executive management team, removing both the CEO and CFO. Experienced internet retail leaders such as incoming chairman of the board Ryan Cohen has joined the company. Cohen previously co-founded online retailer Chewy. Additionally, to adapt its buy-sell-trade business to a world of video game downloads, it has ventured into collectibles, board games, and other items.

Unfortunately, this move may also leave GameStop with a less significant competitive advantage. The collectibles business has existed for decades. While GameStop can serve as a name-brand outlet for such a business, it holds little discernible advantage outside of the GameStop name.

Moreover, one can say the same for its core game download business. Yes, it can aggregate available games from each of the manufacturers onto its website. For example, Microsoft (NASDAQ: MSFT) has agreed to give GameStop a cut for each Xbox game sold on its site. Still, investors have little visibility on the percentage GameStop receives. Furthermore, when comparing the Xbox site versus GameStop, the games sell for the same price, leaving GameStop with no advantage there.

Moreover, fourth-quarter fiscal 2020 net sales fell by only 3% from year-ago levels. GameStop also earned a before-tax profit of $11 million in that quarter. This time, it experienced higher operating costs that prevented it from coming close to the $69 million quarterly before-tax profit in Q4 2019.

The company did not publish an outlook. Nonetheless, even with the stock's volatility, one cannot escape the 4,200% return the Reddit-inspired short squeeze helped bring to the company. 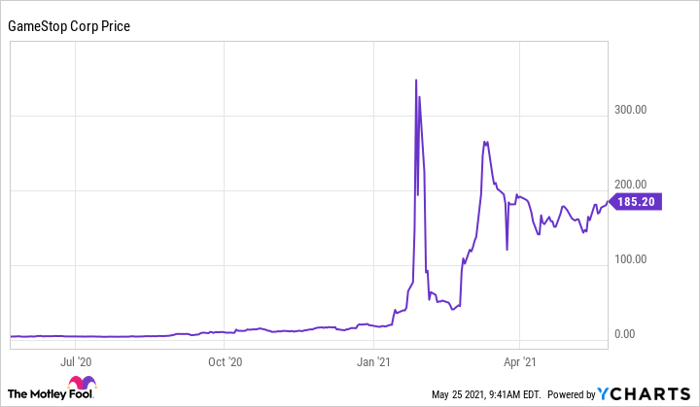 Still, since the stock trades in the $185 per-share range as of the time of this writing, it has raised funds by issuing shares. Now, almost 71 million shares have become available, up from 65 million in March. While this strategy can help save the company, shareholders pay the price in the form of less valuable shares. Worse, this dependence confirms that the stock remains in survival mode with no obvious path for prosperity.

The massive run-up in GameStop stock and the strategic shift to online sales may have saved GameStop. Now, GameStop holds the needed funding to make its digital-first transformation a reality.

However, survival is not prosperity, and with a weak competitive advantage, it could struggle to maintain its valuation long term. While it is not "game over" for GameStop, long-term investors will more likely win with other internet-centric retail stocks.