But this year, only two of those stocks -- Facebook and Alphabet -- have outperformed the S&P 500 so far as the rotation from growth to value slammed the tech sector. Are the FAANG stocks still good investments in this shifting market, or should investors buy more conservative stocks instead?

A history of beating the market

Three of the FAANG stocks have lost some steam this year, but all five have remained ahead of the S&P 500 over the past five years. 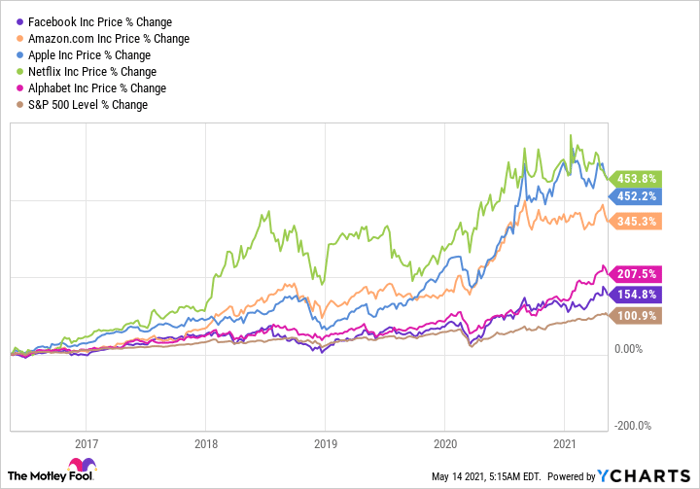 Facebook's audience, which includes users of its namesake platform, Instagram, and WhatsApp, continued to expand and supported the growth of its core advertising business. Amazon's business also fired on all cylinders as Prime subscription plans locked in more retail customers and Amazon Web Services (AWS) maintained its lead in the cloud infrastructure market.

Apple's annual iPhone shipments dipped after hitting a historic high in 2015, but the expansion of its services segment, stable sales of iPads and Macs, and newer product lines like Apple Watches and AirPods all cushioned the blow. Apple's iPhone shipments are expected to soar again this year as the iPhone 12, its first family of 5G devices, sparks a fresh wave of upgrades.

But can they stay ahead of the market?

Investors should note that past performance never guarantees future gains. All these companies, with the exception of Netflix, currently face antitrust challenges.

Regulators are scrutinizing Facebook's role in spreading "fake news," its usage of personal data, and its dominance of the social media market. They're examining Amazon's e-commerce strategies, as well as Apple's and Google's high app store fees.

These tech titans also face new competitive threats. Younger social platforms like ByteDance's TikTok, Snap's Snapchat, and Pinterest are all growing their niche platforms at faster rates than Facebook, which serves 3.45 billion people with its family of apps.

The digital transformation of resilient big-box retailers like Target and Shopify's self-serve tools could threaten Amazon's e-commerce business, while AWS -- its main profit engine -- is still growing at a slower pace than Azure.

Apple's strong iPhone sales should enable its biggest business to generate double-digit sales growth this year, but the global chip shortage is already throttling sales of iPads and Macs. Apple's clashes with developers over its App Store fees and its recent privacy changes to iOS could also generate unpredictable headwinds for its growing services segment.

Netflix's subscriber growth missed expectations last quarter, indicating that rivals like Disney were gaining ground, and it plans to spend up to $17 billion on new content this year to maintain its lead. Google seems poised for a strong recovery this year as its advertising business stabilizes, but the aforementioned antitrust challenges and Apple's iOS privacy changes could still impact its search and advertising divisions.

These five companies all face some near-term uncertainties, but I believe their core businesses will remain resilient for years to come. All five companies could generate double-digit revenue and earnings growth this year, and they all seem reasonably valued compared to other high-growth tech stocks. Check out what analysts are predicting and what the companies' have for price-to-earnings ratios based on those estimates.

I prefer Amazon, Apple, and Alphabet over Facebook, which could hit a ceiling as newer platforms lure away its users, and Netflix, which might struggle to hold the House of Mouse at bay.

That being said, I still believe all five stocks are better investments today than many of the unprofitable "hyper-growth" tech stocks which are trading at nosebleed price-to-sales ratios. I'm not sure if all five FAANG stocks will outperform the S&P 500 over the next five years, but I think they'll all be trading at higher levels than today.