My colleague Morgan Housel recently observed Berkshire Hathaway’s (NYSE: BRK-A) (NYSE: BRK-B) struggles in recent years. Despite Warren Buffett’s genius, his company only places 345th in returns among S&P 500 stocks over the last 10 years, and it has underperformed the broad market over the last 14 years. Morgan’s conclusion was that a compressing price/book value was to blame. In other words, Buffett is still an excellent manager and continues to create value, but the share price of Berkshire has not risen along with the underlying value. Over the last 20 years, the P/B has dropped from more than 3 at times to near 1.

Looking at Buffett’s individual picks, however, it’s clear the market still gives him respect. When Buffett invested US$5 billion in Bank of America (NYSE: BAC) preferred stock last summer, the bank’s common stock went up 9% that day. Later, in the spring, B of A shares traded as high as US$10, giving investors a near 50% return if they sold then — even though they’re back below US$7 right now.

Last week, filings revealing Berkshire’s latest purchases led to more than a 2% bounce in General Motors (NYSE: GM) that day and also helped Viacom post a modest gain in a down market.

Considering Buffett and his right-hand man Charlie Munger’s age, it’s understandable why Berkshire shares aren’t valued as highly as they used to be. The company readily admits the importance of those two men, stating in the risk factors: “We depend on a few key people for our major investment and capital allocation decisions. If for any reason the services of our key personnel, particularly Mr. Buffett, were to become unavailable, there could be a material adverse effect on our operations.”

Notably, while Berkshire shares have floundered at times, Buffett’s favorite investments have put up solid returns, indicating that perhaps instead of investing with him, investors should just follow his lead in their own portfolio.

Looking at the chart below, we can see a comparison between Berkshire’s performance and Buffett’s four largest investments (with the exception of IBM since that was a new addition).

Source: YCharts. Returns are cumulative throughout each period and include reinvested dividends.

As you can see, Berkshire has failed to match up to the returns of its biggest holdings for a while now. The P/B multiple compression may offer some explanation, as does the ability to reinvest dividends from investing in individual companies.

But there seems to be another, perhaps more illuminating explanation, as the charts below indicate. 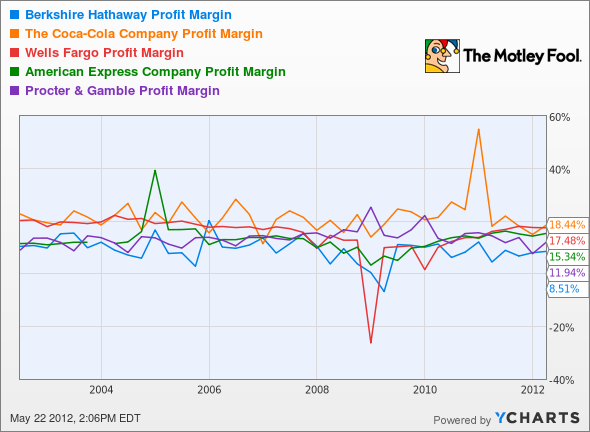 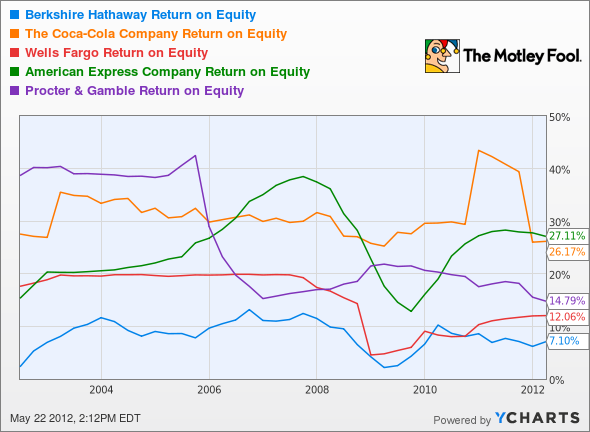 Profit margin and return on equity are two key ways to measure value creation, and in both categories Berkshire falls behind Buffett’s favourite investments. Buffett’s key holdings may simply be better businesses than Berkshire Hathaway.

It seems that Buffett’s true skill is as a value-seeking investor, not in running Berkshire’s wholly owned subsidiaries, which tend to focus on conservative businesses such as insurance. For example, one of Berkshire’s biggest holdings, GEICO, generally earns a profit margin of 5%-6%, which while impressive in the insurance industry, still lags well behind the margin of some of Berkshire’s biggest investments. And while GEICO has been gaining market share in its industry, the auto insurance market is barely growing, at just 1% a year, so the upside the potential from GEICO is limited.

Buffett’s latest pick seems to highlight this point. GM has risen from the grave to become the world’s No. 1 carmaker, and was ranked No. 5 on the Fortune 500’s 2011 list, after profits jumped nearly 50% last year. The stock trades near 52-week lows at a P/E of just 6.5, seemingly being punished for taking a bailout and for the stake the government still owns. It looks even cheaper when you consider the company’s leading market-share position in China’s fast-growing economy, not to mention it’s a favorite of our Inside Value newsletter, which believes it has an intrinsic of more than twice its current share price.

With just 10 million shares, Buffett’s recent purchase in GM isn’t going to be enough to move the needle at Berkshire, but I’m betting it’s a promising sign on GM’s future. For now, I’d rather follow his lead than invest with him.

It’s no secret that Buffett’s a fan of the financial sector with Wells Fargo being one of his biggest holdings, and his recent investment in Bank of America. He recently remarked on the current situation in the industry, saying, “If I had the choice of buying or selling, I’d be buying.” Lucky for you, some of these undervalued banks are too small for Buffett to make a meaningful investment in, leaving the opportunity open for individual investors like you.

A version of this article, written by Jeremy Bowman, originally appeared on fool.com