Self-driving technology has been advancing quickly over the last decade, and there are now a handful of companies operating fully autonomous commercial vehicles in the market. And it may surprise you to find out that Tesla (NASDAQ: TSLA) is not yet one of those launching fully autonomous vehicles, despite the attention it has received about its driver-assist technology.

Alphabet's (NASDAQ: GOOG) (NASDAQ: GOOGL) Waymo and General Motors' (NYSE: GM) Cruise are now operating fully autonomous ride-hailing services in the San Francisco area, and Waymo is also operating in the Phoenix area, both without a safety driver. If all goes according to plan, within the next few years, fully autonomous ridesharing will likely be available in some cities in the U.S., and the companies leading the way include some surprising names.

There are eight companies with permits to operate driverless tests in California, where most of the country's self-driving testing is taking place. Four have deep ties to China, and we'll set them aside for now given the uncertainty facing Chinese technology companies both in China and in the U.S. Those companies are Auto X, Baidu, Pony AI, and Weride.

The other four companies have received approval to bring self-driving technology to market and in some cases are already offering rides to the public.

All four of these companies should be taken very seriously because of the technology they've developed. But they're taking their technologies to market in very different ways.

Building a company to last

Developing self-driving technology is one thing. Building a business will be another. Companies are going to have to build the physical vehicle infrastructure, attract a network of users, and continue to build and advance technology. This will take an incredible amount of cash.

Nuro's path to the market is clear. It's delivering goods to people's doors, and, with a custom vehicle design and pods that keep items safe and secure while in transport, this could be a future vision of delivery if it can scale fast enough to beat the competition.

Waymo, being owned by Alphabet, has enormous resources and capital behind, so access to capital isn't a problem compared to other independent ventures. The company has a product called Via that aims to bring autonomous driving to commercial vehicles. It's also testing an autonomous ride-hailing service, which it could launch more broadly. But it's not clear if there's a custom vehicle in development, as Cruise and Zoox have developed, to make ridesharing a reality.

Cruise has been much more upfront with its plans, the Cruise Origin, which is under development. The company also has a war chest of $10 billion to deploy vehicles, $5 billion of which came from GM Financial. Cruise is majority-owned by GM, and that gives the company the ability to tap into GM's manufacturing expertise and its financing muscle to grow. It's already doing that, and that may give it a leg up in building an autonomous driving business.

Where should your autonomous dollars be going?

As a public stock investor, if I were to bet on any two companies in autonomous driving it would be Waymo and Cruise. Zoox seems to have great technology but it's unknown what Amazon will do with it and Nuro is still privately held, so isn't eligible for investment by retail investors.

Waymo and Cruise are clearly industry leaders in self-driving vehicles, and they're already transporting people around cities in the U.S. The difference between them is the upside they could generate for their respective owners.

Alphabet is a nearly $2 trillion company, and Waymo's impact on a company that size will be limited just because of the company's current size.  GM, on the other hand, is a $72 billion company, and if Cruise becomes a valuable business it would be transformational. Cruise is already valued at about $30 billion, so the upside for GM from that level is simply much higher than it is for Alphabet. 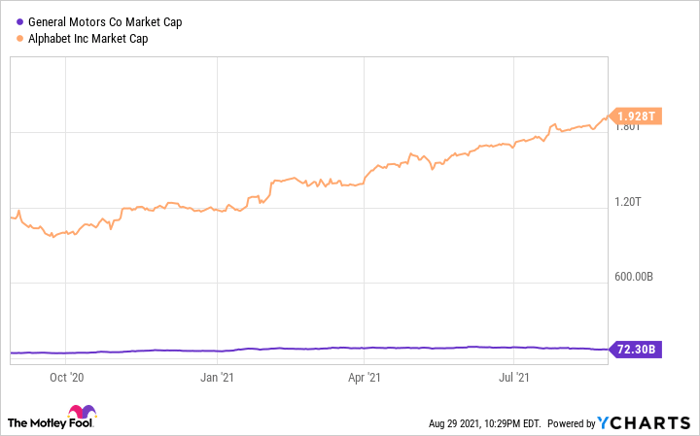 Despite being somewhat under the radar, GM has arguably built the most impressive autonomous driving business in Cruise. The company has a custom vehicle in testing, a manufacturing partner, billions in financing, and it could launch to the public in the next year or two based on plans to launch in Dubai late in 2023 and in San Francisco sometime ahead of Dubai. If self-driving cars are indeed going to be a revolution in transportation stocks, GM may have the most to gain.