After one iPad Mini date rumour fizzled out with no fanfare and another, more reputable one took its place, Apple (Nasdaq: AAPL) has now officially sent out media invitations for the event scheduled exactly one week from today. AllThingsD had pegged Oct. 23 as the day, with Reuters promptly backing up that date.

Apple typically sends out invites a week in advance, and the iPad maker has done just that right on schedule. The tag line for the event is “We’ve got a little more to show you.” That’s a pretty clear hint that the iPad Mini is set to be the feature presentation. The multi-coloured background even implies the device may come in a slew of colours like the new iPod touch. 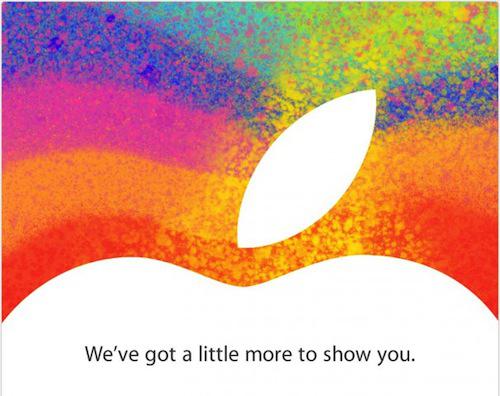 Apple is said to also be focusing heavily on iBooks at the event, since the most successful 7-inch rival to date has been Amazon.com‘s (Nasdaq: AMZN) Kindle Fire, which naturally taps into Amazon’s massive e-book catalogue. The Kindle Fire and Google‘s (Nasdaq: GOOG) Nexus 7 are the two competing devices that have the most to lose from the entry of an iPad Mini.

One more thing? How about many more things?
The iPad Mini likely won’t be all Apple shows off to the world. There’s a wide range of speculation of what else Apple might have on tap, including potentially updating three of its Mac lineups.

There has even been speculation that Apple would unveil an updated version of its latest iPad. This one seems rather far-fetched, because Apple has thus far never released a meaningful iDevice update mid-product-cycle. That would threaten to irritate buyers of the newest model launched earlier this year.

This updated “new iPad” would adopt the smaller Lightning dock connector and could potentially see its processor upgraded to the A6 chip. Another possibility could be the use of IGZO display technology to make it thinner. It could also add international support for LTE, while the current model only supports LTE in North America.

In one short week, we’ll find out.

If you only invest in one company this year, make it our “Top Stock for 2012-13”. Operating in two hot markets — one set to double by 2012, the other predicted to grow 5x over the next five years — this stock is a solid growth play that also boasts strong recurring revenue, zero debt, and lots of cash. Get its name and full research case in this brand-new FREE report.