One of the biggest changes Apple (Nasdaq: AAPL) is pursuing within its mobile operating system iOS is ditching Google (Nasdaq: GOOG) Maps, the app that has been a mainstay of iDevices since inception.

Apple has done this by stitching together three acquisitions its made over the years: Placebase in 2009, Poly9 in 2010, and C3 Technologies in 2011.

The pair’s relationship has been souring slowly for years and this inevitable displacement has been a long time coming.

Data crunching
My biggest question heading into the release of iOS 6 was how Apple could supplant the trove of data that Google has aggregated over the years. Ultimately, all the fancy 3-D renderings and eye candy in the world mean little if Apple’s in-house offering was less functional.

After Apple officially unveiled its maps app, it became clear that it had partnered with other companies to pitch in with the data, most of it coming from GPS player TomTom (OTC: TMOAF.PK) That was enough to bring the number of business listings Apple has up to roughly 100 million, more than Big G’s estimated 80 million. It’s also partnered with Yelp (NYSE: YELP) for integrated reviews.

Apple likes to integrate as much as it can into its devices, so the motivation for giving Google Maps the boot is obvious. With iOS 6 just recently being released to the public, was Apple right or wrong in ditching Google Maps?

An Apple-to-Google comparison
I compared Apple Maps (iOS 6) on an iPad with Google Maps (iOS 5) on an iPhone.

In some ways, Apple’s version is easier on the eyes. It is vector-based, so zooming transitions are smoother, and the 3-D Flyover is undoubtedly impressive. Here’s downtown Austin Texas, with the iconic Frost Bank tower and State Capitol. 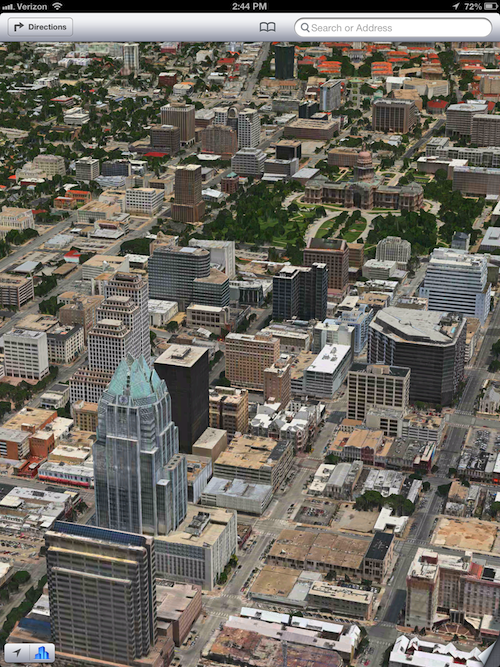 Of course, Google is fixing to roll out its own 3-D maps, so Apple hardly has a unique advantage here. On top of that, there are some early reports of some areas of Apple’s maps being plagued with glitches and other abnormalities.

Apple Maps also lacks the useful Street View images that Google has spent years collecting by sending its army of vehicles to nearly every corner of the civilised world. For urban dwellers that rely heavily on public transportation, Apple Maps will also disappoint, as this feature is now gone.

Are we there yet?
By the looks of it, Apple may get some backlash as mapping features users have grown accustomed to are now noticeably absent. There are no doubt plenty of political and competitive reasons why Apple would choose to take over its mapping destiny, but the average user likely isn’t going to be compassionate to those reasons when they’re stuck trying to figure out which bus or train will get them home the old-fashioned way.

Presumably Apple’s offering will improve over time and the iPhone maker will address these concerns, but it seems like for now its new Maps app is one step forward and two steps back. Many users might think Apple was trying to fix something that wasn’t broken, and in the process… broke it.